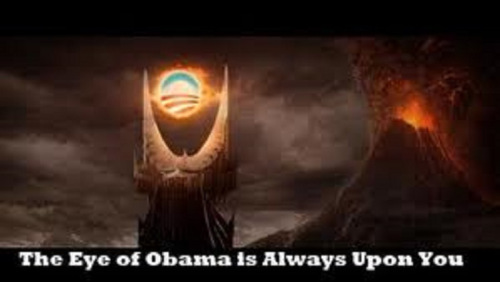 You know that saying that even the paranoid sometimes are right?

14 months ago, on March 19, 2012, I wrote a post “2013: The end of privacy in America,” about the construction of a heavily fortified $2 billion Data Center in Utah, by the National Security Agency, in which the federal government will store (and analyze) your every email, cell phone call, Google search, parking receipt, credit card purchases, and more. The construction was expected to be completed by September of this year, but it looks like the Data Center is already up and running.

For several years, two Democrats on the Senate Intelligence Committee,Senator Ron Wyden of Oregon and Senator Mark Udall of Colorado, have been cryptically warning that the Obama regime was interpreting its surveillance powers under the Patriot Act in a way that would be alarming to the public if we knew about it.

Last year in a letter to Attorney General Eric H. Holder Jr., Wyden and Udall wrote: “We believe most Americans would be stunned to learn the details of how these secret court opinions have interpreted Section 215 of the Patriot Act. As we see it, there is now a significant gap between what most Americans think the law allows and what the government secretly claims the law allows. This is a problem, because it is impossible to have an informed public debate about what the law should say when the public doesn’t know what its government thinks the law says.”

The American people are now finding out to what the two senators were cryptically referring.

Charlie Savage and Edward Wyatt report for the New York Times, June 5, 2013, that, using a hotly debated section of the Patriot Act — the supposed anti-terrorist legislation that first became law in the George W. Bush administration, then not just continued but expanded by Pres. Lucifer — the Obama regime is secretly collecting every overseas, domestic and local phone call and email (called “metadata”) logged by Verizon Business Network Services (VBNS). Verizon Business is one of America’s largest telecommunications and Internet providers for corporations.

This discovery was disclosed yesterday by the UK paper, The Guardian, contained in a highly classified court order, signed in April by Judge Roger Vinson of the Foreign Intelligence Surveillance Court. Vinson’s order directs aVerizon Communications subsidiary, VBNS, to turn over “on an ongoing daily basis” to the National Security Agency (NSA) all call logs “between the United States and abroad” or “wholly within the United States, including local telephone calls.”

The FBI had asked for the court order under a section of the Foreign Intelligence Surveillance Act, the 1978 law that regulates domestic surveillance for national security purposes, allowing the government to secretly obtain “tangible things” like a business’s customer records. The provision was expanded by Section 215 of the Patriot Act, which makes it easier to get an order from the Foreign Intelligence Surveillance Court to obtain business records so long as they were merely deemed “relevant” to a national-security investigation.

The order was marked “TOP SECRET//SI//NOFORN,” referring to communications-related intelligence information that may not be released to noncitizens. That would make it among the most closely held secrets in the federal government. The collection of call logs is set to expire in July unless the court extends it.

Judge Vinson’s order does not apply to the content of the communications, which means it’s a blanket order, instead of one that specifically targets only communications containing Dept. of Homeland Security (DHS) “trigger words“. (For a list of those words, see our LTG’s post of May 27, 2012, “DHS Trigger Words?“.)

It is not clear whether similar orders have gone to other parts of Verizon, like its residential or cellphone services, or to other telecommunications carriers. The order prohibits its recipient from discussing its existence, and representatives of both Verizon and AT&T declined to comment Wednesday evening.

Obama administration officials at the F.B.I. and the White House also declined to comment on it Wednesday evening, but did not deny the report, and a person familiar with the order confirmed its authenticity. “We will respond as soon as we can,” said NSA spokeswoman Marci Green Miller in an e-mail.

Kate Martin of the Center for National Security Studies, a civil liberties advocacy group, said that “absent some explanation I haven’t thought of, this looks like the largest assault on privacy since the N.S.A. wiretapped Americans in clear violation of the law [under the Bush administration]. On what possible basis has the government refused to tell us that it believes that the law authorizes this kind of request?”

Even more alarming, Andy Greenberg reports for Forbes, June 5, 2013, that although the NSA has long justified its spying powers by arguing that its charter allows surveillance on those outside of the United States, while avoiding intrusions into the private communications of American citizens, the Obama regime’s spying order to Verizon specifically targets Americans, instead of foreigners.

Elspeth Reeve reports for the Atlantic Wire that the NSA’s surveillance of our communications is most likely much, much bigger than that. Technology has made it possible for the American government to spy on citizens to an extent East Germany could only dream of. Basically everything we say that can be traced digitally is being collected by the NSA.

Previous reporting from many outlets suggests that’s true. In 2006, USA Today‘s Leslie Cauley reported the NSA was secretly collecting call records with data from AT&T, Verizon, and BellSouth. A source told Cauley, “It’s the largest database ever assembled in the world” and that the NSA wanted “to create a database of every call ever made” within U.S. territory. Likewise, in 2011, The New Yorker‘s Jane Mayer spoke to former NSA crypto-mathematician Bill Binney, who “believes that the agency now stores copies of all e-mails transmitted in America, in case the government wants to retrieve the details later.” He thinks the NSA wants all emails to be searchable, the same way we search with Google. “The agency reportedly has the capacity to intercept and download, every six hours, electronic communications equivalent to the contents of the Library of Congress,” Mayer said.

And the NSA isn’t just collecting the things we say. It’s also tracking what we buy and where we go. In 2008, The Wall Street Journal‘s Siobhan Gorman reported that the NSA’s domestic data collection “have evolved to reach more broadly into data about people’s communications, travel and finances in the U.S. than the domestic surveillance programs brought to light since the 2001 terrorist attacks.” That means emails records, bank transfers, phone records, travel records.