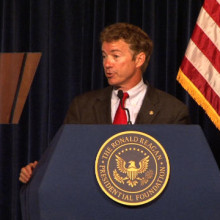 As Senator Rand Paul (R-KY) took questions at the Reagan Library over the weekend he took a shot as Senator John McCain (R-AZ), whose trip to meet with Al-Qaeda operatives in Syria, under the cloak that they are Syrian rebels, sparked an outcry from American patriots. Paul said that since McCain had his picture taken with kidnappers, he didn’t know how good of a job the Federal government is doing in vetting those who would receive arms in Syria.

A reporter asked Paul, who is as a member of the Senate’s Foreign Affairs Committee, what he thought the top priority for foreign affairs of the United States is.

“I think the top priority for the country constitutionally, historically, and appropriately is defense of the country. That’s what we’re supposed to do in Washington,” he answered to applause.

“This is an important distinction,” he added.

Paul then spoke about some in the Republican Party that wanted to give money to Muammar al-Gaddafi in Libya and then a year later wanted to provide money and resources to rebels to overthrow the Libyan leader. “There’s a certain inconsistency,” he commented.

The Kentucky Senator then spoke about his concern with getting involved in a new war in Syria.

“Well people say Assad is such a bad guy,” Paul said. “He is, but on the other side we have al-Qaeda and now Nusra and they say, ‘there are some pro-Western people, and we’re going to vet them. Well apparently we had a senator over there who had his picture taken with some kidnappers, so I don’t know how good a job we’re doing vetting those who are going to get the arms.”

Again, applause erupted because Senator Paul was simply pointing out the truth. I’ll add he should have called for John McCain to be brought up on charges of treason for standing alongside and giving aid to the enemy of America.

Paul then pointed out two ironies that must be overcome if the US wants to get involved in the war in Syria. Here are the ironies:

“You may well be arming Islamic rebels who may well be killing Christians,” he said. “Does that make Assad a good person? No. I don’t think there are any good people in this world and there’s some tragically innocent people who are going to be caught in the middle.”

“I just don’t know that our arming one side is going to make the tragedy any less,” Paul added. “So I think we need to be careful.”

I agree with Paul’s comments. They are level headed and the right way to be thinking about what is taking place. However, I’ll add just one more thing. There is no “may well” when it comes to arming Islamists in that area. We have done it. My guess is this administration, the Democrats and the RINOs will be more than willing to side with one Islamic group against another and spill the blood of Americans, not seeing past the vacuum that will be created in an Assad defeat which will be quickly filled by the Muslim Brotherhood. We’ve already seen it in Egypt and in Libya. What makes anyone think Syria would be any different?