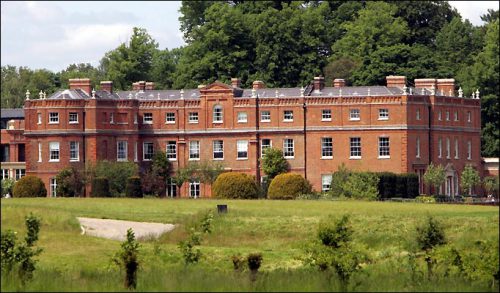 For the first time in the history of these secret meetings the guest list has been published. But yet again the world is left asking why the secrecy of Bilderberg? And why the lack of media coverage? It would appear a few key names were left off the guest list and have allegedly entered the Grove Hotel for the weekend conference.

Although the ‘official’ guest list for Bilderberg has been made public through the major media for the first time  this year, the real interest will be in who is NOT on the list…

Today’s Bilderberg coverage which was streamed live on the Guerilla Media Network, saw the UK’s Liberty Tactics team reveal from reports on the ground in Watford that both Hillary Clinton and her husband, former US President Bill Clinton, were spotted entering Bilderberg’s Grove Hotel today, along with luminaries David Rockefeller and Henry Kissinger.

Both the jet-setting Clintons were also present at Kissinger’s 90th birthday party this past Monday night in New York City.

James Britpod from Liberty Tactics explains about Bilderberg’s non-guestlisters who have been spotted, “We do have Hillary, Bill, as well as quite a lot of others”.

Anyone who has done any research at all into the theory of the New World Order will not be surprised to see a Rockefeller and a Kissinger in attendance. Kissinger was actually on the guest list.

But, as if we didn’t already know, this has to be another likely sign that Hillary Clinton will be running for President in 2016. Dr. Eowyn wrote about this subject and Bill Clinton’s secret deal with Obama earlier this week.

Even if Hillary doesn’t run for President in 2016 there is no real doubt why she and Bill would be at this conference. The Clintons are globalists and no matter what anyone says of the conspiracy it does not matter. I don’t have to know the exact things that are said this weekend and have an Alex Jones spy cam inside the building. All I have to do is use common sense.

Therefore, what do they talk about at these Bilderberg meetings?

Why so secret? If the Clintons crashed the party uninvited then throw them out. Surely that is not the case. I couldn’t walk inside that hotel and say, “I wasn’t exactly invited but WHAT DOES IT MATTER?“