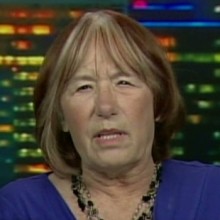 Pat Smith, of fallen information management officer Sean Smith, who was killed during the September 11, 2012 attack in Benghazi, Libya, was to attend a special ceremony honoring her son. However, she was never brought to the ceremony to witness the award that was to be presented in honor of her son.

Mrs. Smith took time to respond to the news that Susan Rice, the woman that went on five Sunday shows and lied to the American people about what took place in Benghazi, who has now been appointed as national security adviser to Barack Obama.

“It’s kind of curious,” Smith said in response to the news of Rice’s appointment. “I don’t understand why Obama would want a proven liar to be his security adviser. That makes no sense to me at all.”

When asked if she had something she would like to say to Obama, should he care to listen, Smith said, “Please, listen to the American people. Don’t listen to whoever it is that’s advising you.”

Smith also added information that her son had conveyed to her prior to his death about the lack of security and that there were people taking pictures and other things that gave him cause for alarm.

Pat Smith has been one of the most outspoken family members of those who lost loved ones in Benghazi. She’s also been very critical of the Obama administration and for good reason.

Smith told Sean Hannity that the Obama Administration refused to fly her to a ceremony that was honoring her son.

“When I went to the casket ceremony they told me that there was going to be an award and that they would send for me; that they would get me over there so I could witness the award. They didn’t do it. And not only did they not do it… He (Obama) lies. He lies and so do everyone who’s surrounding him. They’re not telling the truth. And I don’t know why… They told me I was not immediate family. I have that in writing. They were not going to send for me.”

Smith has been one that has called for an independent House investigative committee to deal with Benghazi. She has backed Congressman Frank Wolf’s (R-VA) resolution calling for the same. Speaker of the House John Boehner (R-OH) has said he will not allow such a committee investigation.

We are being inundated with scandals on a daily basis, which is the Alinsky playbook, and yet no one is held accountable or brought to justice. Frankly I’m tired of Congress dragging their feet on these issues. With that in mind let me suggest something to those in Congress on the committees who listen in on the hearings and question people they have subpoenaed. You have the evidence on many of these scandals. If you don’t have it, then it’s because the administration has thumbed its nose at you. Stop with the politicking and start with the impeachment proceedings against the current occupant of the White House and start with bringing justice to all involved under Obama’s authority. Must the people who elected you march on Washington and hold your feet to the fire to do the job you were elected to do? If that is what it comes to, it will not be a pretty sight.