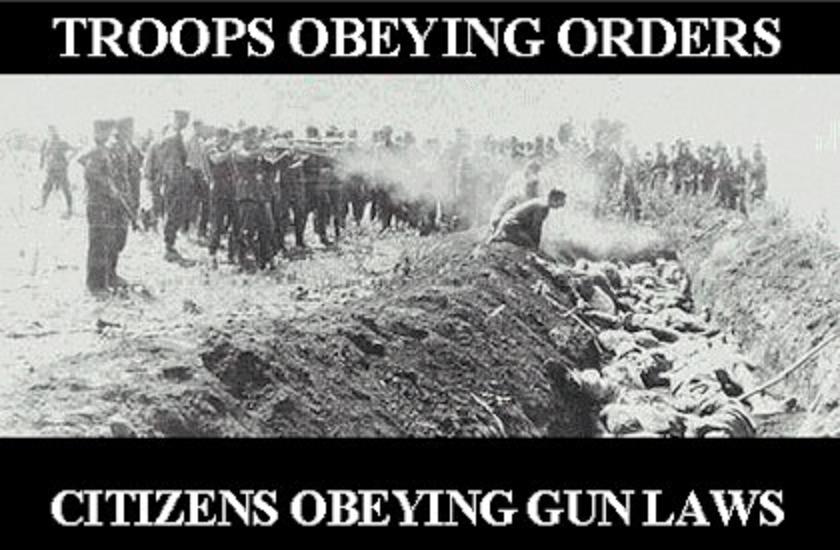 I was asked a simple question on one of the message boards/ social networks/ forums I frequent. “Are you willing to die to protect your guns?” What an absurd question; why would anyone be willing to die? Dianne Feinstein claims she is for hunters rights. She does not get it. Even though I am a Hunter I do not own a gun so I can hunt. I do not need you Ms Feinstein to protect my hunting rights; I can do that on my own.

During the entirety of Bush’s Presidency I heard from the left how much they feared that man and what evil he may do. How he was a fascist, a tyrant, evil, antichrist, and so on. How he was a puppet and wanting to take over the world. If you really believe this, if you really believe that we had a President that did not care about your rights and was hell bent on conquering; why would you not want a way to protect your family from such an evil tyrant?  Is it because you now have a sympathetic ear in the White House? A man that thinks the way you do? How long do you think he will be President? How long before there is another EVIL Conservative in the Oval Office? Are you willing to bet your family that no President will ever try and seize power? I’m not.

I really do not think that this President is trying to take over the world (On reflection I was wrong on this point). I do not believe that he is an evil man (Again I was wrong) okay maybe he is just an incompetent stooge. I may be wrong so I am not willing to bet my family on it. Franklin said “Those who would give up essential liberty to purchase a little temporary safety, deserve neither liberty nor safety.” What was he really saying? What Franklin was talking about was that giving up freedom when you feel safe will rob you of safety and freedom later. Are you 100% positive that the US will never have a tyrant for a President? You thought Bush was a tyrant so you have to believe the American right is capable of electing a worse one. Are you willing to bet the freedom and lives of your children that no man will ever try and conquer them? Are you willing to enslave your grandchildren out of necessity of a false safety?

Our Founding Fathers were very cautious men. They knew that eventually a Tyrant will rise (one always does) and they knew the people had to have a way to protect themselves from said tyrant. That is why they are quoted as saying things like “Government is not reason; it is not eloquence. It is force. And force, like fire, is a dangerous servant and a fearful master.” George Washington. “Necessity is the plea for every infringement of human freedom. It is argument of tyrants. It is the creed of slaves.” William Pitt. “One loves to possess arms, though they hope never to have occasion for them.” “Laws that forbid the carrying of arms… disarm only those who are neither inclined nor determined to commit crimes… Such laws make things worse for the assaulted and better for the assailants; they serve rather to encourage than to prevent homicides, for an unarmed man may be attacked with greater confidence than an armed man.” “No free man shall ever be debarred the use of arms.” Thomas Jefferson. “Before a standing army can rule, the people must be disarmed; as they are in almost every kingdom in Europe. The supreme power in America cannot enforce unjust laws by the sword; because the whole body of the people are armed, and constitute a force superior to any band of regular troops that can be, on any pretence, raised in the United States. A military force, at the command of Congress, can execute no laws, but such as the people perceive to be just and constitutional; for they will possess the power, and jealousy will instantly inspire the inclination, to resist the execution of a law which appears to them unjust and oppressive.” Noah Webster.

This is what Ms. Feinstein does not understand. I don’t think she is smart enough to understand it. We American gun owners are not holding on to guns to hunt, or out of anger. We hold on to our guns just in case we ever need them. I own a gun(s) praying I never have to use it. My question to those that ask that absurd question is simple: “Are you willing to die trying to take my gun(s)?”

Editor’s Note: This article originally appeared on The D.C. Clothesline back in January. Dann Diaz has been AWOL for awhile working on a special project but he is back. Dann is one of a core group of writers who built DCC to what it is today.  I am very grateful for him and glad to have him back. Look for more articles from Dann in coming weeks. -Dean Garrison, Editor of The D.C. Clothesline.