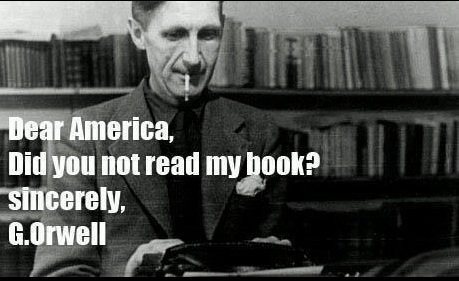 Three days ago, no thanks to our useless State Controlled Media here in America, a UK paper, The Guardian, that the Obama regime is exploiting Section 215 of the Patriot Act to secretly collecting every overseas, domestic and local phone call and email (called “metadata”) logged by Verizon Business Network Services, Verizon Business is one of America’s largest telecommunications and Internet providers for corporations.

The Guardian‘s discovery broke the dam.

A new report reveals that, via a new classified program called PRISM, the NSA and FBI are directly tapped into central servers at nine U.S. internet firms, in order to provide constant monitoring of audio, video, photos, emails and documents as well as connection logs.

That, together with past reports by Forbes, Atlantic Wire, USA Today, The New Yorker, and the Wall Street Journal, should lead Americans with even a half-functioning brain to conclude that our every phonecall (land and cell), email, credit card transactions, bank transfer, and travel record are being tapped and recorded by nameless faceless spooks in the federal government.

Former National Security Agency (NSA) crypto-mathematician Bill Binney confirmed that “the agency now stores copies of all e-mails transmitted in America, in case the government wants to retrieve the details later” and that the NSA “reportedly has the capacity to intercept and download, every six hours, electronic communications equivalent to the contents of the Library of Congress.”

So where are all the mountains and mountains of “metadata” being stored?

In the Utah Data Center — a heavily fortified $2 billion compound in Bluffdale, Utah, about which I’d posted 14 months ago, on March 19, 2012, “2013: The end of privacy in America.” There, the NSA will intercept, store, and analyze your every email, cell phone call, Google search, parking receipt, credit card purchases, and more. The construction is expected to be completed by September of this year, but it looks like the Data Center is already up and running.

Below are photos of the Utah Data Center, taken by the AP’s Rick Bowmer, June 6-7, 2013 (Source: Real Clear Politics).

A friend who works for the Australian government in defense writes in an email: “There’s about $30m worth of power management and generation sitting in those shots.  It’s the equiv of providing power to almost 600,000 people. I would imagine that Chinese imagery analysts are having a field day poring over imagery provided free of charge. Stalin’s comments about getting free rope to hang their enemies springs to mind.”