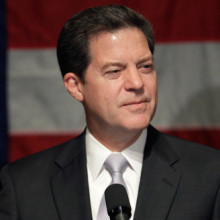 Kansas Governor Sam Brownback, who signed into law the The Second Amendment Protection Act, which has been referred to as the strongest Second Amendment legislation in the nation, has gone a step further. Now Brownback has signed a bill into law that would prohibit any state employee, municipality or school district from using taxpayer dollars to lobby in support of or against gun control.

Attorney General Eric Holder threatened Brownback by writing him a letter to inform him that The Second Amendment Protection Act was “unconstitutional,” stating “In purporting to override federal law and to criminalize the official acts of federal officers, S.B. 102 directly conflicts with federal law and is therefore unconstitutional.”

Brownback simply replied, “With respect to any litigation, we will happily meet Mr. Holder in court.”

I assume this latest legislation may garner a similar response from the Attorney General, who is now embroiled in several scandals including the snooping into reporters emails, Fast and Furious (including being in contempt of Congress due to the scandal) and a congressional investigation into whether or not he perjured himself.

House Bill 2162, known colloquially in the state Legislature as the ‘NRA bill’ because of the gun lobby’s backing of the legislation, will take effect on July 1, 2013, and is seen by gun rights advocates as a way to further secure the Second Amendment rights of responsible gun owners in the Sunflower State.

In addition to banning the use of taxpayer dollars to hire lobbyists for gun control, local governments cannot create “publicity or propaganda” materials, such as “any kit, pamphlet, booklet, publication, electronic communication, radio, television or video presentation” related to gun control.

While some argue that this comes close to violating the First Amendment rights of “cities and towns,” it becomes apparent that they have no idea that rights are granted to individuals, not government.

In fact, whoever elected Mike Dever of Lawrence, Kansas, should seek a recall. Mayor Dever doesn’t like the State’s concealed carry law. In other words, he has a real problem with the Second Amendment. He told the Associated Press, “It kind of creates an interesting dilemma for local government agencies, when they feel strongly about something and have to be careful.”

The problem is that these people want to use public money to push their agenda against the people. Individuals and businesses can still spend all the money they like to get their message out.

“This is not a freedom of speech issue,” State Senator Jeff King, told the AP. “This is an issue of using taxpayer dollars.”

Kansas seems to be headed in the right direction and the signing into law of HB 2162 is just another step.

House Speaker Ray Merrick said, “”It goes along with a lot of good legislation that’s happening on Second Amendment rights.”