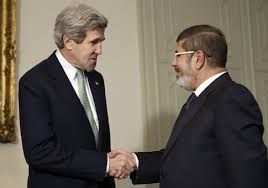 Last month John Kerry quietly approved $1.3 Billion in military aid for Egypt and reportedly informed Congress. This happened on May 9th and the story is only breaking within the last 36 hours. I’m not sure what “informing Congress” means exactly. Does this mean he had dinner with Nancy Pelosi and happened to mention it to her? As evident by her Obamacare remarks this week she wouldn’t remember anyway. But if this happened to be common knowledge then we have some serious housecleaning to do my friends.

Americans are already livid that we sent F-16s and Abrams tanks to Egypt followed by $250 million in aid. Now we are sending another $1.3 billion? And you have not heard the worst part.

Secretary of State John Kerry took it upon himself to “waive” certain conditions that were supposed to be met in order to receive this aid. According to Breitbart:

According to laws governing the funds,  in order to give the $1.3 billion to Egypt, the Secretary of State had to certify that the Egyptian government “is supporting the transition to civilian government, including holding free and fair elections, implementing policies to protect freedom of expression, association and religion, and due process of law.”

But these restrictions can be–and apparently were–waived by the Sec. of State in this instance.

In a memo dated May 9, Kerry wrote: “A strong U.S. security partnership with Egypt, underpinned by Foreign Military Financing (FMF), maintains a channel to Egyptian military leadership, who are key opinion makers in the country.”

“A decision to waive restrictions on FMF to Egypt is necessary to uphold these interests as we encourage Egypt to continue its transition to democracy,” he explained.

I have been hammering this Egypt story for months and honestly not many people seem to care. Every time I write about this arrangement it seems to fall on dear ears, but I am going to keep pounding because American people need to know what is going on here.

Do you have any interest in hearing the justification for such a measure? From Alarabiya.net:

Psaki defended Kerry’s approval of aid for the fiscal year 2013 saying it was in US national security interests and helped such things as “maintaining access to the Suez Canal and the interdiction of weapons smuggling.”

I will say again what I have been saying for months. This Administration has no balls when it comes to dealing with the Middle East. Even if you throw all of the conspiracy theories out the window, which I would not advise doing, you are still left with a simple case of a bully taking our lunch money.

In another secret move that was relatively unreported, Kerry offered a $4 Billion package to rebuild the Palestinian Economy.  What? We can’t keep government programs running due to mandatory cuts but this guy is spending money like it’s going out of style. Well you have to be Muslim to get it but still…

Egypt is a country whose national past time is not baseball…it is persecuting Christians.

61% of Egyptians feel that terrorist attacks on Americans are justified.  Who gives money to someone who wants to kill them?

We have recently learned from an Egyptian journalist that Morsi has been potentially tied to Benghazi.  This has not been reported in the American press much.

And there you have it. Let’s keep giving these people our lunch money.

If I were Muslim I’d be calling for Jihad on John Kerry right now. They are called “useful” idiots for a reason. He is just pushing an agenda of the Kenyan who longs to be King. The Kenyan is pushing an agenda for the UN-inhabitants of America who are funding his rise to the throne.

There is only one King and his name is not Elvis. People have to wake up soon. This is not about bad policies and politics. It is a question of good versus evil. We keep giving money to people who want us killed.

What does that tell you about our leadership? Most of those who will read this already know. But we need to be yelling this at the top of our lungs every single day because the coach potato who lives next door needs to know. So long as so few are awake in this country this will keep happening.

Just wait until Rand Paul finds out about this. Dr. Paul almost had a coronary over $250 million to Egypt. Somehow I don’t think that Congress was truly consulted because we have a few people in both the upper and lower chamber of this government who would have been raising hell by now.

Anyway I hope we do.

When you read things like this, it makes you wonder.