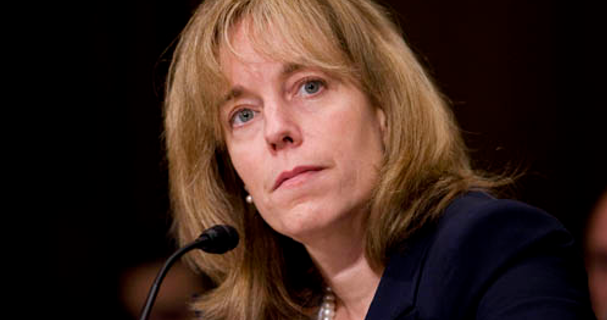 Obama has already failed to put his top choice, Caitlin Halligan, on the bench there.  Halligan has an abysmal record as a judge but a phenomenal one in activism from the bench, which was the whole idea behind her nomination.  It was the second time the former solicitor of New York was rejected by the Senate.  As the solicitor general of New York State, she tried to advance the theory that gun manufacturers should be legally responsible for crimes committed with their product, even if it was sold legally.

Even more interesting is that Obama is criticizing senators for doing exactly what he did as senator.  Albeit with one sharp difference.  Obama voted to filibuster Bush nominee, Peter Keisler, a man with an impeccable record on the bench.  In fact, he voted to filibuster him twice in 2 years based only on the fact that he was a strict constitutionalist.  Obama also voted to filibuster Alito and voted against Justice Roberts.  Obama’s time in the senate was dedicated to preventing conservatives from the courts.

Obama is complaining that his judicial nominees have fared worse than those under Bush and in that respect he is right.  However, what he fails to mention is that the quality of the judges he has nominated has been ridiculously low.  The liberal ABA (American Bar Association) has declared a large number of his appointments as unqualified.  In fact, in his first four years, Obama nominated more judges ruled to be unqualified than Bush and Clinton did in a total of 16 years.  That’s amazing.

Are you aware of the judicial record of that wise Hispanic member of La Raza, Sonia Sotomayer?  Of the court cases she handled that went to the Supreme Court, she was overturned 80% of the time.  How could he nominate such a judge and how could republicans let her sit on the highest court of the land?  Surely, judicial competence is fair game for a filibuster.

Obama has now introduced 3 more judges for the bench in Washington, a move opposed by republicans based on the fact that the Washington court would have more judges than other districts with much higher caseloads.  In truth, the republicans are trying to deny Obama a rubber stamp for his unconstitutional activities.  This is backed up by the fact that the Washington Court has the lowest caseload in the nation.

“The thing is, virtually everyone agrees that the D.C. Circuit — with the lowest number of appeals filed annually  — does not need more judges because it is already significantly under-worked. According to legal expert Ed Whelan, the D.C. Circuit’s total pending appeals dropped around 10% since 2005, falling from 1,463 to 1,315 from September 2005 to September 2012, while pending appeals per active judge increased by only one case. The Circuit’s judges, including the contributions of senior judges, now have around two-thirds the workload of their colleagues in 1995-96.

Senate Democrats once agreed. In 2006, every Democratic Senate Judiciary Committee member, including Sen. Schumer and then-Sen. Joe Biden, wrote a letter opposing the nomination of Peter Keisler because the court was underworked. Keisler waited 900 days for a vote that never came. Miguel Estrada, another D.C. Circuit nominee, was filibustered seven times by Senate Democrats because, as Illinois Sen. Dick Durbin’s office put it, he “has a minimal paper trail, he is Latino and the White House seems to be grooming him for a Supreme Court appointment.”

The nominees are, Patricia Ann Millett, Cornelia Pillard and Robert Wilkins to fill three vacancies on the 11-seat U.S. Court of Appeals for the District of Columbia Circuit.  They appear to be at first glimpse qualified and republicans are willing to vote for them for other district appeals courts, but they do not want Obama packing the court that hears constitutionally sensitive cases packed by liberal judges.  And since the democrats argued the same thing when Bush was president, this is obviously political in nature on both sides.

Obama is really to blame for the fact he has had a hard time filling the court, since he named Halligan in 2010 and Sri Srinivasan in 2012.  Srinivasan was confirmed by a large bipartisan majority.  Halligan didn’t even get the support of all the democrats either time she was nominated, due to her lack of judicial sense.

This is just another in your face maneuver by Obama meant to challenge the republicans to reject them.  It seems the most logical course would be to name one of them to the Washington court and the other two to courts that are severely overworked if indeed all three are declared fit for the bench.  But as we all know, common sense is lacking in this administration as well as in the senate.

Steven Ahle is the Editor of Red Statments and a regular contributor to The D.C. Clothesline.