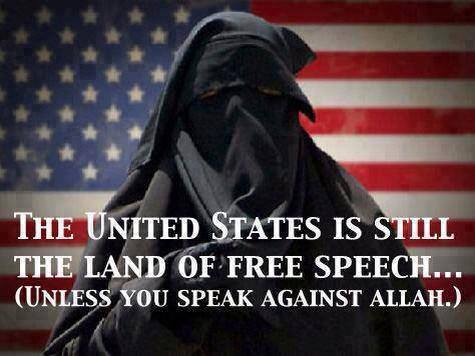 Joke: A Pastor, a Priest and a Rabbi walked into a bar…

Your laughter is the difference between a democracy that guarantees freedom of expression, and a theocracy that stifles discussion of, let alone jokes about, religion – and any other subject it dictates.

Human rights begin with freedom of thought and freedom of expression; democracy depends on them. Many believe that Biblical criticism eventually led to the secularization of Western civilization and certainly without the exercise of freedom of expression and inquiry, wherever they may lead, there would not have been any real progress in Biblical studies, or tolerance of dissident views.  Islamic countries are in complete opposition to this view and belief.

It was apparent at the U.N. Human Rights Council in Geneva when The Universal Declaration of Human Rights of 1948 was written, a document whose articles 18 and 19 guarantee freedom of thought, conscience, religion, opinion and expression.  Immediately the articles were killed by the Islamic countries involved. Islamic countries have tried for several years, and recently have succeeded, in stifling any criticism or even discussion of Islam and the violations of human freedoms it invokes.

Seventeen Islamic member states of the Human Rights Council, with support from China, Russia and Cuba, succeeded in forcing through an amendment to a resolution as a result of which the UN Special Rapporteur on Freedom of Expression will now be required to report on the “abuse” of this freedom. Anyone criticizing Islam or the Sharia’s will now be deemed to have ‘abused’ their freedom of expression. In other words, instead of protecting freedom of expression, the Special Rapporteur will be required to police its misuse.

The UN human rights machinery has been taken over by the Islamic States, whose record on human rights whose allegiance is to a seventh-century worldview defined exclusively in terms of man’s duties towards God or Allah. The Islamic States have been supported by other nations with a hatred of the United States of America, and by those who see their future economic and political interests as being best served by allying themselves with the Islamic States.  This is a far cry from the duty of the United Nations to promulgate the Universal Declaration of Human Rights in 1948 commitment to the ideals that equality, individual freedom and the rule of law are the rule not the exception.

In a ruling in 2008 after attempts by the Egyptian and Pakistani delegates at the Council to silence criticism of human rights abuse in the Islamic world, all discussions of religious questions are banned at the Human Rights Council.  Criticism of Sharia Law or fatwas are completely forbidden.  When a representative of the Association for World Education denounced the stoning death of women accused of adultery, rape, and of girls being married off at the ages of nine years old, the speaker was suspended from speaking further.  An Egyptian delegate shouted, “Islam will not be crucified in this Council”.

In the West, we use the term “democracy” , meaning the rule of the people, involving free and fair elections, and whose Constitution enshrines the principles of rule of law, equality before the law, the right of minorities, a separation of powers, freedom of expression, religion, assembly, and the right to property; in other words a Bill of Rights that limits the power of the central government, protects the rights of individual citizens against arbitrary arrest, and protects the right to due process.

Historically, Greece gave us democracy, Rome gave us the notions of limited government, and the rule of law, but it was the rise of the Christian Church that was the source of liberty in the West since it was the first major institution in history that was independent of temporal authority and willing to challenge it.

The Islamist are quite capable of using the democratic process to destroy liberal democracy.  Are we in the West going to cave in to pressure from societies with a medieval mindset, or are we going to defend our most cherished freedom, the right to speak, and express ourselves, freely?

A democracy cannot survive for long without freedom of expression, the freedom to argue, to dissent, even to insult and offend. It is just this freedom that is sorely lacking in the Islamic world. Without it Islam will remain in its dogmatic, fanatical, medieval fortress; ossified, totalitarian and intolerant. Without this fundamental freedom, Islam will continue to stifle thought, human rights, individuality; originality and truth. A liberal democracy proceeds by tentative steps after due deliberation, debate, and compromise, and is able to adapt to changing circumstances. This is precisely how an Islamic theocracy does not proceed.

The menace presented by the Islamic theocracy to our various religions, our culture and our nation is a real and current concern. Islam is a theocracy, meaning that Islam is a radical combination of Church and State. Islam is intolerant of any other religion and any other form of government or civil law. Followers of Islam are required by faith to embrace, promote and live within Sharia, the Islamic law, which encompasses both civil and in relation to or constituting a church or denominational law.

The relentless goal of the Islamic theocracy is to expand the entire Muslim world community in submission to Allah. Another term for Ummah is Dar Al Islam, or the House of Peace. Where we non-Muslims live is in Dar Al Harb, or, the House of War. The whole goal of Islam is to expand Dar Al Islam at the expense of Dar Al Harb. This vitally important aspect of Islam is tightly bound up in the guiding ethos of the religion and culture of Islam; it is interwoven into the very purpose for being of the devout Muslim.

Millions of disciples of Islam who know little or nothing about Sharia, other than what they hear in the Mosques, which may or may not go into detail. The fact that there are huge numbers of faithful Muslims who are peaceful and decent people operates in spite of the Islamic theocracy, and certainly not because of it. The whole goal of the Islamic theocracy is to expand itself by force.
Islamic theocracy demands of adherents, toward achieving a one-world Ummah under one grand Caliph:

1. An offer must be made to the non-Muslim person or nation to submit to Islam.

2. The non-Muslim may convert and live in accordance with Islamic religion, culture and law.

3. The non-Muslim may not convert, but submit to Islamic law and Islamic authority, pay a special tax, and continue to live where he resides.

4. If the non-Muslim person or nation does not convert and does not submit, war is to be made against them.

5. If a Muslim commits murder or violence against a non-Muslim in Dar Al Harb without first making the offer, he commits a sin; however, there is to be no temporal punishment for this violation of Sharia, because, in Dar Al Harb, anything goes against the non-believers. Allah is merciful only in Dar Al Islam.

In the United States of America we apply the Constitutional freedom of religion, and classify Islam as a religion rather than a political ideology aimed at world domination. Even outlawing Sharia, as we have recommended, presents the same difficulty, because the Islamic law is itself all bound up in the “religion.”

We are faced with a situation in which foreigners have the unmitigated prefect to plot our death and destruction because of our non-adherence to their foreign laws. Our enemies actually dare to come here and murder innocent people because of their law, edict or fatwa as foreigners not subject to our law. Islamic “immigrants” and local converts feel perfectly free to work within our own borders to achieve our ultimate subjugation or destruction.

Maybe it is time to enforce The Smith Act of 1940, 18 USC § 2385, Advocating overthrow of Government, once again.  The act has not been enforced in nearly fifty five years since the days of the Communist Party leader trials from 1949 to 1958

Whoever, with intent to cause the overthrow or destruction of any such government, prints, publishes, edits, issues, circulates, sells, distributes, or publicly displays any written or printed matter advocating, advising, or teaching the duty, necessity, desirability, or propriety of overthrowing or destroying any government in the United States by force or violence, or attempts to do so; or

Shall be fined under this title or imprisoned not more than twenty years, or both, and shall be ineligible for employment by the United States or any department or agency thereof, for the five years next following his conviction.

If two or more persons conspire to commit any offense named in this section, each shall be fined under this title or imprisoned not more than twenty years, or both, and shall be ineligible for employment by the United States or any department or agency thereof, for the five years next following his conviction.

I submit that the Islamic theocracy cannot properly operate anywhere in America without violating this American law. Full enforcement of this act, if that were possible, might result in the elimination of the Islamic theocracy in America. The prohibitions in the act represent the contents of editorials and sermons heard in most if not all Muslim communities and Mosques in America.

Our civil and ecclesial authorities must be separate, by law; our Constitution demands it. The Islamic theocracy seeks to destroy that, and replace it.

Julia Sieben is the Co-Editor of Lady Patriots and a contributing author to The D.C. Clothesline.

NEW YORK TIMES: Biden Has A ‘Short Fuse’ And Swears At Aides When Frustrated
May 16th, 2021 Clash Daily