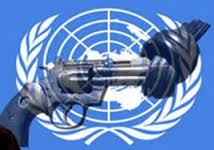 I haven’t been around much the last few days as life has been a little busy. I wanted to get caught up tonight and the first thing to catch my eye was this story:

Rand Paul: UN has secret plot to ‘CONFISCATE and DESTROY ALL’ of America’s guns

I am not sure exactly why this story was shocking to me. WE all know that the U.N. wants one world government and that the American citizens are standing in the way. WE all know the intent of the Small Arms Treaty – that’s why we have been fighting it. I guess I am shocked at the story because a United States congressman actually said it out loud. But then again, it is Ron Paul’s son and we know how outspoken Ron Paul is. Even if I don’t agree with everything Ron Paul stood for, I agree with most of it and I always respected him for speaking out.

So here’s my question, if Rand Paul is aware of these intentions, doesn’t that mean the rest of congress is aware?? Rand Paul isn’t some insider who rubs elbows with these elites – at least I doubt it. How on earth did he and Ted Cruz get elected when nearly everybody else in Washington is so anti-American? Based on the assumption that all of congress knows about the U.N. and their intentions for our country, they should all be tried for treason for every vote to take our freedom and put it in the hands of the United Nations.

I have heard that the government is at “war” within itself. What does that mean? Well, not everybody in D.C. is happy with the administration or with the direction we are headed. I think this is believable. I think occasionally a real American gets through the cracks. Maybe that is how Rand Paul and Ted Cruz made it. Maybe there are others. Maybe some of these recent scandals coming to light are a result of the conflict in the Capitol.

I truly believe where there’s smoke, there’s fire. These conspiracy theories don’t just grow from somebody’s imagination. They need substance to become so big. Then, eventually, most of them come to pass as truth:

The one world order plans

And say what you want, but the fact it took a 13 HOUR televised filibuster to get a response about drone strikes on U.S. soil on our own citizens should scare the sh*t out of you.

So then what does that mean about FEMA camps and the darker “conspiracies”? How much truth is in those? I don’t know that I really want to find out.

This isn’t about Democrats and Republicans – THIS IS ABOUT FREEDOM vs. SLAVERY!

This is your wake up call, America. Look around you, is this the kind of world you dreamed of for your children and your children’s children? Is this what you wanted for them? No? then DO SOMETHING!

Shelly Theiler is the Editor of I Want My Country Back and a new contributor to The D.C. Clothesline.