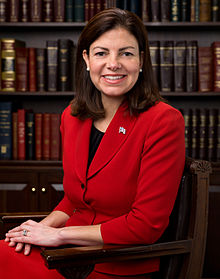 Senator Kelly Ayotte (R-NH) has been a 2nd Amendment hero of mine. I have watched her battle against all odds to protect the right to bear arms and fight back the attacks of Mayor Michael Bloomberg. She has reminded me of “the little engine that could” as she brushed off all of the attacks from her own constituents and stood her ground for our beloved Constitution. All of that has come to a crashing halt for me today. This woman has gone from one of my heroes to just another politician who has seemingly just answered the call of  money. More on that in a moment. On Monday The Washington Examiner ran a feature article about Kelly Ayotte’s sudden change of heart on immigration reform. Byron York reports:

Immigration wasn’t the main issue in the 2010 New Hampshire Senate race. But it was a topic of great interest for many Republican voters, and GOP candidate Kelly Ayotte took a pretty hard line.

Rather than calling for comprehensive immigration reform, Ayotte stressed tightening border security and enforcing existing laws. “In the Senate, Kelly’s top immigration priority will be to secure our borders — no excuses,” said her campaign website. “Simultaneously, she will work to ensure that existing immigration laws are enforced, and is against amnesty.”

Ayotte also endorsed the Arizona immigration law that had come under fire from immigration advocates around the country. “I absolutely support what Arizona has done,” she said. She slammed a Republican primary opponent for allegedly being soft on the Arizona statute. She wanted to make English the official language of the United States. And in a move that took her beyond many opponents of comprehensive immigration reform, she said she might consider changing the Constitution to do away with the 14th Amendment’s birthright citizenship provision.

All in all, the Kelly Ayotte of 2010 did not seem likely to turn into a supporter of today’s 2013 Border Security, Economic Opportunity, and Immigration Modernization Act, better known as the Gang of Eight comprehensive immigration reform bill. But that is exactly what Ayotte did Sunday, with an op-ed and a talk-show appearance declaring her intention to vote for the bill.

“This is a good bipartisan solution and I look forward to supporting it,” Ayotte said on CBS’ “Face the Nation.” “Our immigration system is completely broken.”

“We need to stop the flow of illegal immigrants,” Ayotte wrote in the op-ed, “and we need to bring undocumented people out of the shadows to separate those seeking economic opportunity from those seeking to harm us (who must be deported).”

If Ayotte recognized any of the problems in the bill that she might have objected to in 2010, she didn’t say. Indeed, the striking thing about Ayotte’s endorsement was how little it engaged the substance of the Gang of Eight bill. For example, many of her conservative supporters object to its plan to grant legal status to the nation’s estimated 11 million illegal immigrants before any enhanced security measures are in place. Ayotte sides with the gang on that, but she never explained why.

Byron York seems as puzzled as any of us that Kelly Ayotte would have this change or heart. It’s time to put two and two together. Why would Kelly Ayotte turn on her own morals to support the Gang of Eight Bill? Is it truly a change in her belief system or is it something much bigger?

The nasty rule of Washington politics is to follow the money. As Kelly Ayotte was facing negative advertising attacks from Bloomberg for voting against Manchin-Toomey a White Knight rode into town.

That White Knight was “Reclaim America” who started pushing ads to fire back and defend Kelly Ayotte from the relentless attack ads from Bloomberg’s “Mayors Against Illegal Guns” as well as Gabby Gifford’s group.

Who is Reclaim America? Well they are a PAC who you may have bought a water bottle from at some point. They are the PAC headed by Senator Marco Rubio. That’s right, Marco Rubio. Politifact reported on May 14th:

New Hampshire Sen. Kelly Ayotte saw her poll numbers drop after she voted against a proposal to expand background checks on gun sales.

Now coming to her rescue is Marco Rubio’s Reclaim America PAC. The Florida senator’s group is out with an ad that says Ayotte “voted to fix background checks.”

What do you think about that America? I think Rubio may have learned a few things from his buddies McCain and Graham and now it appears we can add a new lady RINO to their ranks.

Writing this story makes me sick to my stomach. I claim to be a truth seeker and I am, but sometimes the truth hurts worse than others. This is one of those times.

I can no longer endorse Kelly Ayotte in any way. She is now part of the problem and I seek solutions. If she is willing to change her tune and fight for America then she may regain part of my trust, but for now my sincere belief is that…

Kelly Ayotte can no longer be trusted!

If I thought it was truly about her belief system then I could find it in my heart to agree to disagree. But this looks like it’s more about back scratching and I can not stand for that.

If by any chance Kelly Ayotte should read this I would say this to her. We will take care of Rubio and the RINOs. You fight for us and we will fight for you Senator. If you sell us out then you are on our list. Get yourself off of that list while there is still time. Show us the proud warrior who fights for American people and tell the Gang of Eight where they can stick their  Amnesty Bill.

Kelly Ayotte has the looks of an All-American girl and I think that’s why I and many others were taken in by her conservative charm. She has turned into another Medusa to me.

Remember Kelly Ayotte… looks are only skin deep and you look are starting to show your true self.

You know what to do New Hampshire.