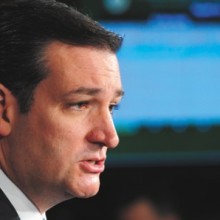 Well, it appears the Socialists just stick to the Alinsky playbook and believe that calling names will be enough to win the day. I suppose they didn’t get the memo that some Americans are just not intimidated by name calling. It seems that Senator Bob Menendez (D-NJ), yes the same Bob Menendez that was embroiled in an underage prostitution scandal, is fond of name calling. In the latest round of the use of “phobia,” which is really becoming quite boring, Menendez said that Senator Ted Cruz (R-TX) must have “Obamaphobia” because he stands opposed to the amnesty bill being pushed forward by the Senate’s Gang of Eight, which is doing nothing more than selling out Americans to illegals.

“Well, I think he has Obamaphobia,” Menendez said of Cruz. “The reality is that it is the Gang of Eight that came together — four Democrats, four Republicans — and said that we need a path to citizenship.”

The comments from Menendez came on Tuesday, following Cruz’s comments on Monday in which he said, “The biggest obstacle to passing common sense immigration reform is President Barack Obama.”

“A path to citizenship is the most divisive aspect of this bill,” Cruz told ABC’s Jeff Zeleny, “and the White House is insisting on it.”

“The path the White House is going down, I believe, is designed for this bill to fail,” Cruz added. “It is designed for it to sail through the Senate and then crash in the House to let the president go and campaign in 2014 on this issue.”

“If Obamaphobia means fear of government tyranny and the willingness to stand against it,” said Cruz spokeswoman Catherine Frazier. “I wouldn’t say that’s inaccurate.”

While Frazier is Cruz’s spokeswoman, Cruz didn’t leave her out to dry. The Texas Senator followed up her comments with a tweet:

If supporting real immigration reform, not path to citizenship is "Obamaphobia," guilty as charged. RT if you're a fellow "Obamaphobic!"

One of the Gang of Eight, Democrat Senator…. I mean Senator John McCain (R-AZ), blasted Ted Cruz in the same manner he has Senator Rand Paul (R-KY), calling him a “wacko bird.”

Cruz said he’s not exactly sure what a “wacko bird” is, but it seems he is not only OK with being called that, but is quite proud of the title.

Good for Cruz! It’s about time someone stood up and let the water roll off their back, rather than submit to political correctness. I’m glad to see this bird ruffling a few feathers in Washington, D.C.