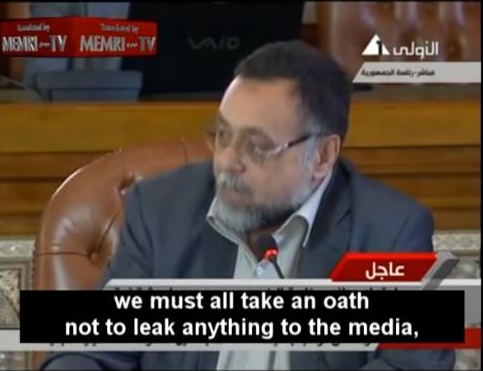 Obama, the Muslim Brotherhood stooge in the White House, just sent these savages $1.3 billion. Autocrats of a feather plot together……

(The Blaze): Just last month, Secretary of State John Kerry quietly sent Egypt an additional $1.3 billion, even though Egypt has failed to live up to democracy standards. That largesse didn’t stop a prominent Egyptian politician from talking about Egypt’s “enemy” the United States in what some pundits are classifying as a classic and embarrassing “hot mic” moment.

President Mohammed Morsi gathered a group of politicians last week who thought they were speaking privately at a parliamentary meeting. But as seen in an Egyptian television video of the meeting —excerpts of which were later translated by the Middle East Media and Research Institute (MEMRI) — they were actually on live television, cringingly discussing secret ways to stop Ethiopia’s Nile River dam project which threatens water flowing to Egypt.

Unaware that their words were being broadcast live on a state-owned television channel, many of those seated around the table said the dam was in fact a secret American and Israeli plot to undermine Egypt that must be stopped at all costs.

The participants learned they were on live TV only after Magdi Ahmad Hussein, chairman of the Islamic Labor Party, suggested that all present vow not to leak any information to the media. Before being told he was on television, Hussein described the U.S. as an enemy [emphasis added]:

I’m very fond of battles. With the enemies, of course – with America and Israel, but this battle must be waged with maximum judiciousness and calm. Even though this is a secret meeting, we must all take an oath not to leak anything to the media, unless it is done officially by sister Pakinam [el-Sharkawy, a Morsi aide]. We need an official plan for popular national security, even if we…

The viewer sees him being handed a note, which presumably points out that his words are not confined to the room. Hussein laughs, then continues with the anti-American and anti-Israel rhetoric: “Okay… Fine… The principles behind what I’m saying are not really secret… Our war is with America and Israel, not with Ethiopia. Therefore, engaging in a war… This is my opinion…”

President Morsi says out for the benefit of all in the room, “This meeting is being aired live on TV,” a comment which prompts laughter all around.

In damage control mode, as if he knew all along that he was on camera, Hussein followed up by saying, “I am not presenting a secret plan or anything. All the countries do what I am saying and what has been said by others. All countries with regional conflicts do that.”

According to the New York Times, someone afterwards could be heard off camera saying, “Why didn’t you tell me that earlier?”

Morsi later appeared to try to send a calming message to Ethiopia, even though other participants in the parliamentary session were openly discussing sabotaging their southern neighbor, including via covert operations, supporting rebel groups or destroying the dam altogether.

“We have a lot of respect for the Sudanese people in the north and the south, and we respect their decisions, and the same is true with regard to the Ethiopian people. We are not about to start any aggression against anyone whatsoever, or affront anyone whatsoever,” Morsi said.

The Ethiopian newspapers say that Egypt has no military option. They say that Egypt does not possess the capabilities – no airplanes, no missiles – and that Sudan would not allow this… Indeed, Sudan’s position is nauseating. It is much weaker than it should be. But we could leak intelligence information. We could leak that Egypt is trying to buy planes for aerial refueling, and so on. Even if this is unrealistic, it would bring results on the diplomatic track.

The water issue is so sensitive in Egypt, because the country’s agriculture is completely dependent on the Nile River. According to the New York Times, Ethiopian officials say the dam will not be used for agriculture, just for the production of electricity and therefore it should not substantially decrease the amount of water flowing to Egypt.

Here is video of the hot mic moment, courtesy of MEMRI:

Pamela Geller is the Editor of Atlas Shrugs and a frequent contributor to The D.C. Clothesline.