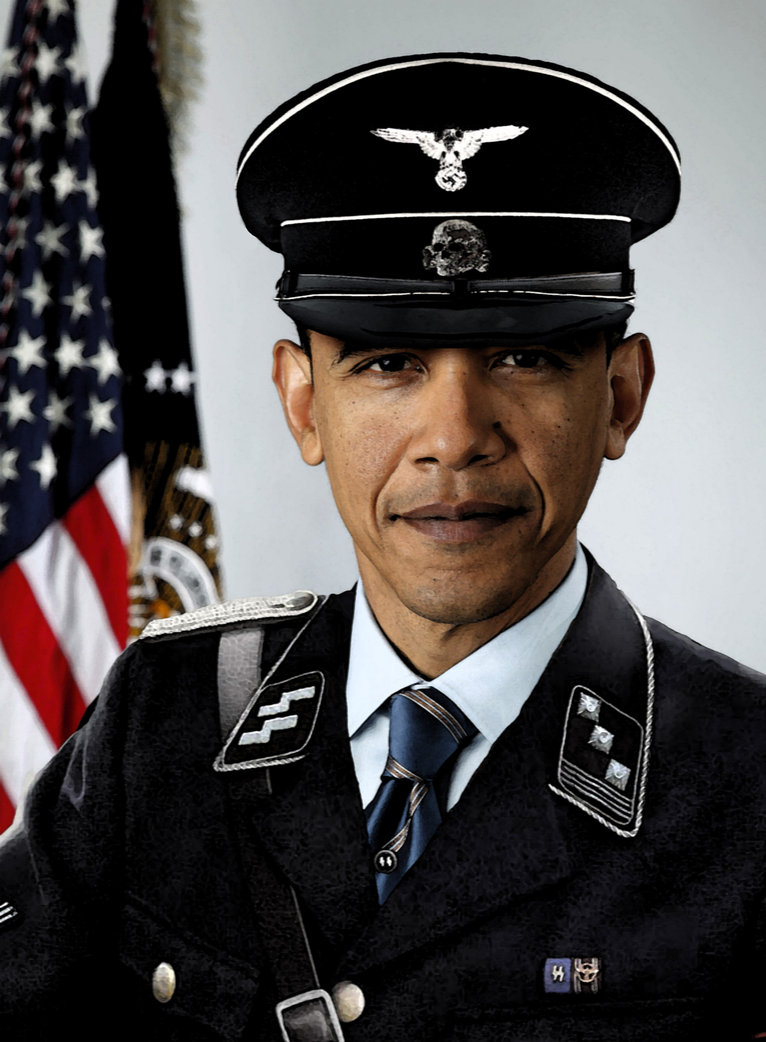 Rush Limbaugh recently said America is in the midst of a coup d’état by the Obama regime.

Indeed, every day brings more confirmation that we are no longer living in America, land of the free. Without a peep, our country has morphed into a dystopia like Nazi Germany or Stalinist Russia.

President Lucifer’s Secret Service Gestapo paid a visit to an ordinary law-abiding American named Tom Francois who, the SS agents themselves admit, had never threatened to do harm to Obama.

The SS goons paid Francois a visit for this simple reason: Francois had tweeted criticisms of Obama and made cartoons making fun of The One, like the one below.

After you read this- you will wonder what country we are in.

Tom Francois is an outspoken critic of Barack Hussein Obama- and has a robust Twitter presence. He also likes to dabble with his “paint” program to create funny cartoons. He has never threatened the President in any way, manner or form.

On April 11, 2013, he heard relentless pounding on his door shouts of “Police!” The officers introduced themselves as members of The Secret Service and asked if they could “take a look around.”

Since Tom had nothing to hide (and he didn’t want any return visits) – he complied fully with their request. He even signed a consent to search his premises AND an “Authorization To Review Medical and Mental Health Records!”

They asked Tom if he ever left his state or traveled to Washington, D.C.

One Agent asked Tom if he has any intentions of “whacking” the President.” To which Tom replied- “Of course not. I wish him no harm. I disagree with his policies and actions and I make no bones about it. It’s my First Amendment Right and I intend to exercise it.”

When I spoke to Tom he said, “Yes, I am EXTREMELY critical of Obama in my posts, but I never cross the line and threaten his being. EVER. It’s just the idea of Obama’s Secret Service intruding on my life when they knew I wasn’t really a threat.”

The Secret Service had a thick FBI file- filled with screenshots of hundreds of posts. Said Tom, “I flat out told them ‘I have NEVER threatened Obama’s life! Yes, I despise him as you can plainly see, but I have that right!’They actually ADMITTED and agreed with me that I hadn’t threatened Obama.”

They had run a background check and discovered that Tom legally owned two guns- and they asked to see them. Tom showed them his firearms. They asked, “Are they loaded?” Tom replied in the affirmative. “What good are guns if they aren’t loaded?”

So why harass Tom? “The Secret Service officers claimed that “they were concerned that since I have a large Twitter following, and the things I said could be acted upon by some nut case out there! What the hell? They turned my life upside down for THAT?”

Tom didn’t refuse the search because they just would have gone and gotten a warrant. “They would have proceeded to tear my house apart. No thanks. I have nothing to hide. They left empty-handed and my house is still intact.”

When they left Tom’s house, one Secret Service Agent ‘advised’- “Keep in mind, if you step over the line, we’ll come back for your guns.”

After the “visit” to Tom, the Secret Service also visited Tom’s 22 year old daughter- terrifying her and making her fear for her father’s safety. She asked them what they were going to do with the information about her Dad. They said they were going to “turn it over to Eric Holder- he has the last word on what to do, if anything.”

Should anyone have any doubt about the veracity of this report, Mr. Francois had the presence of mind to make copies of the Consent To Search (which expressly included computers, hardware, software, recording devices, cell phones, data storage, etc). It also states: “I understand that any contraband or evidence may be used against me in a court of law.”

The “Consent To Search” and the “Authorization To Review Medical and Mental Health Records” signed and dated by the special agents of the Secret Service- were furnished to this reporter.

This administration is spying on Americans, via the NSA and targeting Tea Party and religious groups for voter suppression via the IRS. Now- Obama’s Secret Service is paying personal “visits”- on law abiding citizens? This is TYRANNY!

Keep in mind, dear readers- this raid upon Tom Francois and his home – took place just 4 days before The Boston Bombing. Was this a good use of manpower?

Everyone should be outraged by this story. Republican, Democrat, Independent, Libertarian- EVERYONE!

This kind of intimidation and strong arm tactics CANNOT stand.

Just because a thin-skinned president doesn’t like what a private citizen posts (as his First Amendment Right) on the internet?