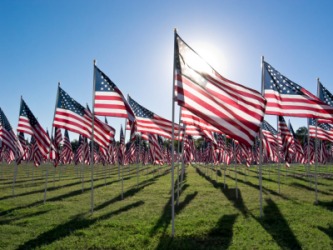 On June 14, 1777, the Continental Congress in Philadelphia passed a resolution which specified that the new country’s flag would have 13 stripes and 13 stars. The red represented valor, the white purity and the blue justice. An Act of Congress designating June 14 as Flag Day each year wasn’t passed until 1949. What transpired between these two dates?

In 1877, 100 years after the flag was adopted, Congress asked all public buildings to fly the flag on June 14 to commemorate that anniversary. They did, but it was a one-time thing, not something to be observed annually.

A Wisconsin schoolteacher, B.J. Cigrand, had his students celebrate June 14, 1885 as Flag Birthday. Four years later, a New York City kindergarten teacher, George Balch, planned a celebration of the flag with his students on June 14.

July 14, 1891 saw a Flag Day celebration at the Betsy Ross House in Philadelphia and the next year, the Sons of the Revolution of New York celebrated Flag Day.

In April, 1893, the Colonial Dames of America adopted a resolution asking the mayor of Philadelphia and all its citizens to diplay the flag on Flag Day, June 14. The Superintendant of Public Schools in Philadelphia proclaimed that June 14 would be known as Flag Day and that all school children in the city would assemble for exercises. Each child received a small flag.

The governor of New York directed in 1894 that each year on June 14 all public buildings would display the American flag.

In 1916, a proclamation by President Woodrow Wilson established June 14 as a day to celebrate the anniversary of the Flag Resolution of 1877. Finally, on August 3, 1949, President Truman signed an Act of Congress directing that National Flag Day would be observed every year on June 14.

Since that time, flags have been flown on June 14 at public buildings and homes throughout the nation.

Pat McCarthy is an instructor for the Institute of Children’s Literature and the author of over a dozen books for children. Learn more about her books at her blog, http://www.PatMcCarthysAuthorBlog.blogspot.com

If you have a question about writing for children, e-mail Pat at [email protected] More resources for children’s writers will soon be up on the blog.