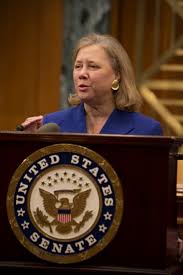 Senator Mary Landrieu (D-LA) is just another brainwashed Immigration Bill supporter who doesn’t get it. In an absurd argument she stonewalled the arguments of Senator John Thune (R-SD) and belittled the problems of the border his state shares with Canada. I would venture to say that the Senators from  the other 56 states all understand the extreme danger of leaving this border unsecured. I mean no offense to our Canadian friends. It’s not the two-legged Canadians that Americans should be fearful of, with the obvious exception of Sasquatches, it’s the Moose and Bear population that has been increasingly angered at the population Christian Fundamentalists in South Dakota. Moose jihad is a serious threat in this country and Senator Landrieu knows not of what she speaks.

OK so I am being absurd of course. Canadian Moose-lims are peaceful as we all know. And come to find out, South Dakota does not even share a border with Canada. Take off eh! Geez, you learn something new every day. 🙂

Senator Landrieu has officially had a Dan Quayle moment as reported by Breitbart:

While attempting to attack an amendment to the “Gang of Eight” immigration bill that would require a fence be built along Mexico’s border with the U.S. before legalization, Sen. Mary Landrieu (D-LA) made a significant geographical gaffe.

Landrieu, who represents Louisiana in the U.S. Senate, was trying to undermine the amendment Sen. John Thune (R-SD) offered. In doing so, she tried to argue Sen. John McCain (R-AZ) was more qualified to talk about border issues than Thune because McCain represents Arizona.

“A smart fence, which is what Senator McCain and I want to build–since he’s from Arizona, I think he knows more about this than the Senator from South Dakota who only has a border with Canada and that is quite different,” Landrieu said.

South Dakota does not share a border with Canada. It does, however, share borders with North Dakota, Wyoming, Montana, Minnesota, Nebraska and Iowa.

Landrieu went on to argue that the 700-mile border double-fence that Congress passed into law a few years ago is a “dumb fence.” She said she would be “voting against” Thune’s amendment requiring the implementation of current law because of she thinks the fence is “dumb.”

“So I would be voting against Senator Thune’s amendment because I’m not going to waste taxpayer money on a dumb fence, and that’s what his amendment would be,” Landrieu said. “We need to build a smart fence and a fence is not just a physical structure which could be built out of a variety of different materials with or without barbed wire on the top.”

There is not much way to report this story to make it more entertaining than it already is. So I apologize for my attempt to be funny. I’ve been told that is not my strong suit.

But you seriously have to ask yourself where this woman could have possibly come from and how on earth she could have ended up in the United States Senate? Supposedly she grew up in New Orleans and graduated from LSU. She is from a political family.

That’s the story we get.

If we are electing people this “dumb,” her word not mine, then what does it say about us as a nation?

Some people really are too “dumb” to vote and it’s not always the constituents that fall into this category.

By the way, she is considered one of the most conservative Democrats in the Senate.

P.S. By pointing out the difference between Mexico and Canada doesn’t that qualify her as racist? People are people. You should be ashamed Senator.