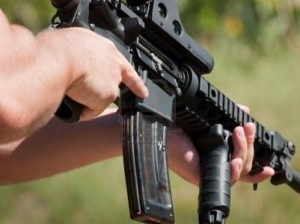 The AR-15 (ArmaLite Rifle-15) is a lightweight, 5.56 mm, magazine-fed, semi-automatic rifle, with a rotating-lock bolt, actuated by direct impingement gas operation or long/short stroke piston operation. First built by ArmaLite as an assault rifle for the United States armed forces, financial problems led ArmaLite to sell the AR-15 design was sold to Colt. The select-fire version of the AR-15 entered the U.S. military system as the M16 rifle. Colt then started selling the semi-automatic version of the M16 rifle as the Colt AR-15 for civilian sales in 1963.

Norvell Rose reports for Liberty News, June 12, 2013, that in late May, Congressman Jeff Duncan (R-SC), chairman of the House Homeland Security oversight subcommittee, toured a federal law enforcement facility and noticedagents training with the semi-automatic weapons. Even though it was a Dept. of Homeland Security (DHS) training facility, the shooters reportedly identified themselves as Internal Revenue Service enforcement.

Duncan (pic above) says he was surprised to hear they worked for the IRS:

When I left there, it’s been bugging me for weeks now, why IRS agents are training with a semi-automatic rifle AR-15, which has stand-off capability. Are Americans that much of a target that you need that kind of capability?

The IRS defends the training, in a statement that reads, in part:

In responding to the revelation about IRS agents training on AR-15s at a DHS facility, the agency included a link to its enforcement website. But the website contains no obvious reference to the need for, or use of, high-powered assault rifles. Instead, there are statements such as the following, which have nothing at all to do with tax agents training to use semi-automatic weapons in their enforcement operations:

Today’s sophisticated schemes to defraud the government demand the analytical ability of financial investigators to wade through complex paper and computerized financial records.

When individuals and corporations make deliberate decisions to not comply with the law, they face the possibility of a civil audit or criminal investigation which could result in prosecution and possible jail time.

Neither “analytical ability” nor “civil audit” nor “criminal investigation” entails the use of assault rifles.