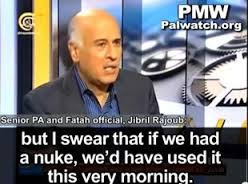 Jibril Rajoub is a member of the Palestinian Fatah Central Committee is often described by the Obama administration as a “moderate”.   Rajoub said several weeks ago that if Palestinians had nuclear weapons, Israel would already be history.  In a recent interview, Rajoub, contended that Palestinians own all the lands  that  stretches from the Jordan River to the Mediterranean Sea.  If that is the case, then they would own all of what we know today as Israel.

Obama often shows disdain and outright animosity towards Israel, probably a carryover from his AAAN days.  So perhaps compared to Obama, Rajoub is a moderate.  Hopefully, Israel will be able to survive the Obama regime.  Secretary of State John Kerry is trying to negotiate with the Abbas government to create two separate states living in peace.  He is basically ignoring Hamas, as he considers them more radical, but if you look at what the moderates want, the entire country of Israel, what is the real difference between the two?

Here is video proof of Rajoub’s demands.  And these are the people Obama wants to negotiate with.  And here, I offer as proof of the about the Obama animosity against Israel, is the top 10 insults he has leveled towards Israel and it’s leaders.  Not since Jimmy Carter have we had a president so enamored with the Palestinians and hateful towards Israel.  Unlike the multitude of other countries we lavish with cash, munitions, and other aid, Israel has steadfastly stood by us in the UN while the others consistently vote against us.

Indeed, Obama has openly shown his hatred for Israel and only takes their side when it is politically expedient.  Yet his support for Palestinians, the Muslim Brotherhood, and Al Qaeda in Libya is undying.  And if he truly thinks Rajoub is a moderate, imagine what his real attitude towards Israel is.