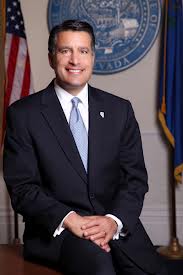 Nevada Governor Brian Sandoval vetoed SB221 on Thursday, keeping it legal for private transactions between gun owners without a background check. The measure would have mandated background checks for all gun sales or transfers whether private or through a Federal Firearms Licensed Dealer.

Gov. Sandoval said in a statement that the bill constituted, “an erosion of Nevadans’ Second Amendment rights under the United States Constitution and may subject otherwise law-abiding citizens to criminal prosecution.”

The bill would have aided only FFL holders as all transactions would have to have been supervised by FFL dealers, whether the gun was being given or sold. Obviously the FFL dealer would have charged a fee for that supervision and of course Big Brother would have known what you were doing with your own firearms at every step in the transaction process.

However, there was more. Sandoval pointed out that that SB 221 would have made a change in the burden of proof associated with the prosecution of a criminal action for the unlawful sale or disposal of a firearm. He wrote, “Existing law requires ‘actual knowledge’ by the seller that the buyer meets disqualifying conditions or is otherwise prohibited from possessing a firearm. Senate Bill 221 alters this burden of proof from ‘actual knowledge’ to ‘reasonable cause to believe,’ potentially exposing additional law-abiding Nevadans to criminal prosecution.”

Sandoval cited a request for a veto of SB 221 by the Nevada Sheriffs’ and Chiefs’ Association, which read “The sections of SB 221 requiring mandatory background checks on private sales place an unreasonable burden on law-abiding citizens, with the potential to make them criminals. It would be unenforceable by law enforcement. It is our opinion this bill would do little to keep firearms out of the hands of criminals.”

Though Sandoval calls the bill “laudable in its efforts to strengthen reporting requirements concerning mentally ill persons” and says it “has merit and includes a number of worthy components,” the governor pointed out that it “imposes unreasonable burdens and harsh penalties upon law-abiding Nevadans, while doing little to prevent criminals from unlawfully obtaining firearms.”

The Associated Press reports, “It is a significant defeat for New York City Mayor Michael Bloomberg’s gun control advocacy group, Mayors Against Illegal Guns. The organization spent hundreds of thousands of dollars working to get the bill passed through to the governor.”

Senate Majority Leader Harry Reid (D-NV) said, “I am deeply disappointed in Gov. Sandoval’s decision to veto this bill. People convicted of a felony or suffering from a severe mental illness should be prevented from buying a gun with a simple background check. Ninety percent of Nevadans agree and it is too bad this bill has been vetoed.”

Mark Kelly, husband of former congresswoman Gabrielle Giffords (D-AZ) and firearm hypocrite, said “Nevadans won’t forget and neither will we.”

Yeah, and we won’t forget your hypocrisy earlier this year involving the purchase of an Ar-15, which when you were caught you attempted to claim it wasn’t a purchase for yourself.

The Law Vegas Review-Journal reports on the effects the gun owners had in putting pressure on the governor to veto the bill when people flooded his office on June 4. “2,200 people called his office between 9 a.m. and 4 p.m….  Four out of five calls [were] for the veto.”

The Journal also indicated that the calls were one of the chief reasons that the Governor set up a hotline number. In fact, his office claimed it couldn’t get any work done because they were being “bombarded by calls from people who want the governor to veto the gun control bill passed by the Legislature.”

See? Your actions do result in victory! Stay vigilant America!

I applaud Sandoval for the veto. It was the right move.