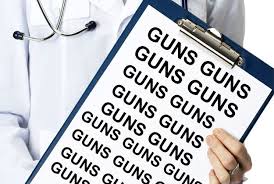 Pres. Lucifer has not had success with his gun control machinations, so now it appears he’s turning to another strategy — that of using the medical profession to take guns away from owners.

About 4 months ago, I wrote about some of our military vets receiving a letter from the Veterans Administration informing them that they are found to be “mentally incompetent” and are thus forbidden “from purchasing, possessing, receiving, or transporting a firearm or ammunition.” A month later, I wrote about Connecticut police confiscating firearms from a disabled Navy vet named David Schmecker, followed by another post about a New York psychiatrist confirming Obama’s plan to confiscate guns from military vets.

According to the account below, by a reader of SurvivalBlog who lives in one of the New England states (Connecticut, Maine, Massachusetts, New Hampshire, Rhode Island, or Vermont), the problem has now gone beyond veterans and V.A. hospitals to civilians and non-military hospitals.

*Obama, when he was a lecturer at the University of Chicago, told  John Lott (author of At the Brink) that “I don’t believe people should be able to own guns.”

Letter Re: Some Disturbing Trends in an Eastern Nanny State

I have a couple of disturbing events in my state (southeastern New England) I wish to report to you and your readers.

I do not have medical  insurance.  Because of this I go to the local health  center run (until now) very well by the local hospital. and I have benefited greatly by their care. However, this past week I became quite sick, and made an appointment to be seen by one of their doctors.

Upon entering I saw they have new computers and scanners. A patient must use this to check in. This is done by scanning the back of our driver’s license. Our state has a scanning bar code on the back. When I saw what this was I went directly to the desk and told them who I was and my appointment time. No go, I had to scan in. So I told them I forgot my wallet. No worries it will also use my fingerprints. I wanted to see this and sure enough, through my fingerprint they had all my info. Where did they get this info? I have been fingerprinted before for a few jobs I’ve had in the past but I assumed (foolish me) this remained private.

Eventually I got to the examination room with the nurse and the first question was not how do I feel, what is my medical problem not even my name and date of birth but “Do you own any firearms” to which my response was “None of your business.” She replied that the question had to be answered or they could not treat me. So I said no. In my chart (which is electronic, on a tablet device), the nurse seemed to type a heck of a lot more than “no”. This made me quite angry and so I asked to speak to a supervisor which they did do. The supervisor said that the nurse was wrong and that I did not have to answer the question, and in fact the question of firearms was supposed to be asked if I reported depression or suicidal thoughts. The supervisor was polite and did not seem to be lying or attempting to placate me but when I asked to see my chart I was told I would have to pay the records office and fill out forms. I barely have enough money to pay for the visits let alone the fifty dollars it would take to get a copy of my own medical charts.

A few days later my car broke down on the way home from work and so I pushed it into a parking lot and waited for the tow truck. A town policeman pulls up next to me, and though I do not know him personally, I did recognize him from our local gun store. He recognized me as well. He told me my plate was expired by a couple of months. He did not write me a ticket as I was on private property and it was getting towed anyway. I commented how he got that info really fast and he laughed ruefully and showed me the computer in the car. It automatically scans license plates and alerts to any sort of plate violation or warrants out for the registered owner. Not only that, but it shows any weapon purchased by the owner of the vehicle that were supposedly (I’ll get to that in a second) registered through the state. All paid for by the town, through a grant from Homeland Security. This may all seem pretty bleak but it gets worse. The firearms I own have never had to be registered. In fact due to new laws recently passed this year, I have to until July 1st of this year to register one of them. The rest do not legally have to be registered. I have a one year grace period to get this done, so none of my firearms should be on his list. Yet, on his list it showed two firearms I purchased a couple of years ago. As I said earlier, only one of my rifles will need to be registered. What they are doing is using the forms for the two week wait period we have, to compile a list of firearms owners, bypassing any sort of registration. Out of the weapons I own only two were purchased through a store, the rest through private transaction, which until a few months ago was perfectly legal.

The policeman who showed my all this expressed his own deep reservation over this and claims the state legislature is being inundated with complaints and he expressed hope there would be a court injunction to stop this. I asked him this, and I leave it for you and your readers as well, I asked this policeman “At what point do you refuse the order?” He shook his head shook my hand and replied “I ask myself that a lot these days!”