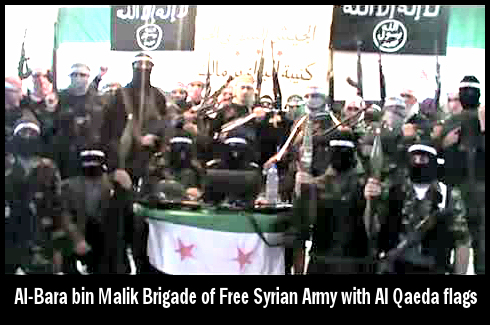 Barack Obama who has aided the Muslim Brotherhood in Egypt and Al Qaeda in Libya, is at it again.  He will be arming Al Qaeda in it’s bid to overthrow Assad.  Both previous actions led to the murders of Americans.  (I wonder if Obama gets a tingle down his leg)  In Egypt, the Brotherhood killed Christians on the streets and in Libya, Egypt and Al Qaeda combined to murder our ambassador and three others.

We saw that same thing in Mexico, where Obama armed the drug cartels, leading to at least 300 deaths.  Apparently, Obama will not commit murder but he is perfectly willing to hold the coats and provide lunch and weapons for those who do.

Syrian Jabhat al Nusra Front chief Abou Mohamad al-Joulani has pledged his support for Al Qaeda and it’s current leader, Sheik Ayman al-Zawahri (Same last name as California shooter) and in return al- Joulani was promised support from the al-Qaeda affiliate in Iraq, the Islamic State of Iraq.  Yesterday, Obama said he would start sending military aid to Syrian rebels.  I guess he figures it worked so well in Libya, where he armed Al Qaeda, who later used some of those weapons in raiding the embassy in Benghazi and later in Algeria, where Americans were also killed.

In fact, Obama was most supportive of overthrows that occurred during the Arab Spring.  Well, except for in Iran.  What made the Iran uprising different?  It was the only country that already had a radical Muslim extremist government.  Of course that could be a coincidence, but if I were you, I wouldn’t bet the rent money on it.

Obama is claiming that Syria has used chemical weapons on it’s people.  I put nothing past Assad and I believe this war is the bad guys vs the worst guys, but it reminds me of the BBQ Janet Reno sponsored in Waco, Texas, ostensibly because the Branch Davidians were sexually molesting children.  No proof of that ever came out, but the actions of Reno, led to the death of 25 children and 50 adults.

But what you have to understand is we have to believe Obama that Assad actually used chemical weapons.  The White House claims that Assad used various chemical weapons, including ricin to kill up to 150 people.  Judge Judy always says if it doesn’t make sense, it isn’t true.  That may apply here.  Several attacks and only 150 dead.  Ricin is extremely deadly and inhaling just 1 milligram is fatal.  So is it credible that Assad used ricin with such a small death toll?  Possible, yes, probable, no.

Do not get me wrong, I feel Assad is very capable of using ricin, but the death toll would probably have been much greater.  And when I did a search, almost all the accusations came from the US and the few which came from other countries, cited US reports.  Given the choice, Americans should be rooting for Assad.  He may terrorize his own citizens, but he isn’t sending terrorists to American in the hope of doing us harm.  That’s why it’s perfectly understandable that Obama is taking the opposite tack.

Obama claims that he only wants to support rebels not associated with terrorists.  My question is where would he find such a group?  In the end, this is just Obama’s attempt at Radical Islamist nation Building.  Love your country but never trust your government.