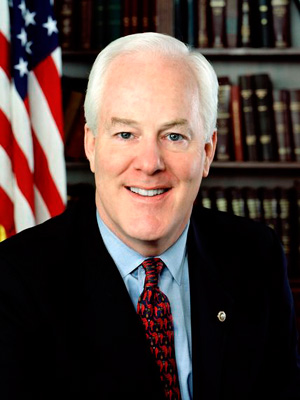 Senator John Cornyn (R-TX) put forward an amendment to the Gang of Eight’s amnesty bill (which will be nothing more than a failed, costly attempt at immigration reform). However, the Gang of Eight seem split over whether or not they want to pursue Cornyn’s influence and support.

First, Cornyn’s amendment to the bill was outlined by Ed O’Keefe:

Cornyn calls his amendment the RESULTS Act, which is short for “Requiring Enforcement, Security and safety, & Upgrading Legitimate Trade and travel Simultaneously.” (It just rolls off the tongue, eh?). The amendment stipulates that no illegal immigrant could apply for green card status until the Department of Homeland Security and Government Accountability Office jointly certify that the following requirements have been achieved:

– That there is “100% situational awareness” along the border, meaning that the U.S. Border Patrol has “monitoring capability at every segment” of the roughly 1,900-mile U.S.-Mexico border.

– That there is “Full Operational Control” along the border, meaning that border agents are maintaining “at least 90% apprehension rate” along the U.S.-Mexico border.

– That a biometric exit system that allows U.S. Customs and Border Protection to track immigrants leaving the U.S. be in place at all U.S. international airports and seaports. Current policy on tracking biometrics at land crossings would be maintained.

– That the national E-Verify System, which employers must use to track a job applicant’s immigration status, would need to be fully operational. (This part of Cornyn’s proposal matches what’s already in the immigration bill.)

There are several other details within the Cornyn amendment, including funding to hire another 10,000 Border Patrol and Customs officers over the next decade and requirements that DHS establish a new “Southern Border Strategy” within 120 days of the bill’s final passage.

Frankly, the fact that illegals are even being considered with reward is what is flabbergasting to me. Why are these people in Washington so afraid of demanding that the law be enforced? Why must they change law in order to accommodate law breakers?

Second, I hope everyone is aware that this E-Verify System is just another means of control. After all, all of us will be put into the system… that’s right, all of us! They can’t find their illegals without lumping the rest of us in. It’s sort of the way our government uses the NSA’s PRISM program. They just drop a dragnet and see what all they get.

Third, giving time for DHS to do anything is ridiculous. Either things are in place to secure the border or they are not. This administration has had five years to get its act together on border security and they have done nothing except make the border less secure. Here’s just one example. Trusting an administration that has lied over and over again to the people of America to do what they should be doing already is incredibly foolish.

Cornyn told Republican colleagues at a meeting Wednesday that he would consider making changes to his amendment to bolster the border-security provisions of the Senate bill.

His willingness to negotiate left some Republicans convinced after the meeting that he would strike a deal with the Gang of Eight and vote for final passage. His support would help the legislation pass overwhelmingly.

Republican members on the Gang of Eight think he is a gettable vote, even though they acknowledge some of their Democratic colleagues are skeptical. Democrats strongly doubt Cornyn will vote “yes,” given his past record of opposing immigration reform plans.

While I’m glad to hear Cornyn say “There are certain elements that are non-negotiable, specifically the mechanism by which we would guarantee the security measures in the bill would actually be implemented,” I’m not happy with other issues in the bill, nor am I happy with rewarding people who have broken the law the first time they step on American soil.

We need border security. We do not need amnesty.

So will Cornyn go to the dark side on amnesty like Senator Kelly Ayotte has? I hope not. Perhaps contacting the Senator and demanding that he not only push for secure borders, but abandon rewarding current lawbreakers. Here’s his contact information: