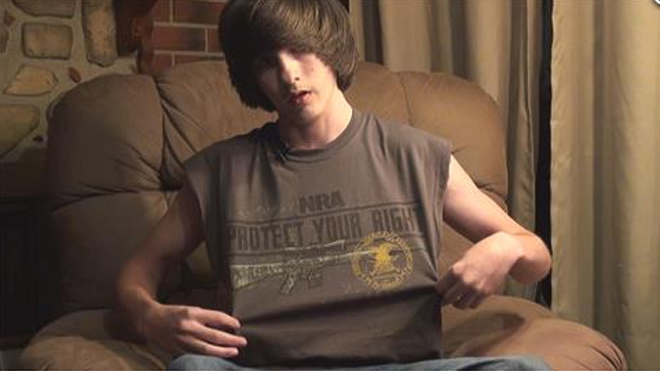 What kind of a system puts a 14 year old kid in jail for a t-shirt? This has to be one of the most bizarre cases of the year. Jared Marcum was arrested at Logan Middle School back in April. His only apparent crime seems to be in his choice of wardrobe for the day. Fox News reported on April 23rd:

Logan police arrested Marcum at the school last Thursday after he refused a teacher’s order to remove the shirt. White says prosecutors are reviewing the case to determine whether to file charges.

Marcum has said that he was arrested on charges of disrupting an educational process and obstructing an officer, though White said Monday that the Logan County prosecutor’s office is reviewing the case to decide whether to proceed.

Marcum wore the same shirt to school Monday. It displays the NRA logo and a hunting rifle.

Other students across Logan County wore similar shirts, which display the NRA logo and a hunting rifle, to school in a show of support for 14-year-old Jared Marcum, said his lawyer Ben White.

This is one of those cases where you would think that common sense would eventually prevail. You would think that arresting officers, their superiors and prosecutors would have eventually come to the conclusion that this was a mistake. Oh no. Not in Logan County West Virginia. They not only arrested this juvenile, they now intend to prosecute him. Local CBS affiliate WTRF reports:

Suspended and arrested after refusing to change his NRA shirt. Today, 14-year-old Jared Marcum appeared before a judge and was officially charged with obstructing an officer.

A $500 fine and up to a year in jail, that’s the penalty that Jared could face, now that a judge has allowed the prosecution to move forward with its obstructing an officer charge against him.

“Me, I’m more of a fighter and so is Jared and eventually we’re going to get through this,” Jared’s father Allen Lardieri said.  “I don’t think it should have ever gotten this far.”

The Logan County Police Department initially claimed that the at-the-time 8th grade Logan Middle School student was arrested for disturbing the education process, obstructing an officer and Lardieri says that officers even went as far as threatening to charge Jared with making terroristic threats.

“In my view of the facts, Jared didn’t do anything wrong,” Ben White, Jared’s attorney said.  “I think officer Adkins could have done something differently.”

Do you think he could have done something differently sir? I’d say that is an understatement. This is an 8th grade kid and Logan County, WV is making this out to be something that it isn’t.

We now live in a country where our children are being made examples of in order to destroy the concept of the 2nd Amendment and paint it evil. Has anyone else picked up on a pattern here?

Kids are getting suspended for cap guns, pop tarts and pencils and it’s all in the spirit of zero tolerance policies. Anyone who does not think that the leftist agenda has infected this country is probably a leftist themselves, or at least a useful idiot.

Whether they actually send a 14 year old kid away for a year, or not, remains to be seen. I would hope that it does not go that far.

I will be a little surprised but not totally shocked if they send this kid to juvenile detention or some sort of boot camp.

What the **** is wrong with this country? And why the **** isn’t anyone rallying to stick up for this kid? Pardon my asterisks.

How far do they have to push us until we finally start to push back? None of us wants this but they have crossed so many lines that they are about to officially back us into a corner.

If that happens there is only one direction that we can go.