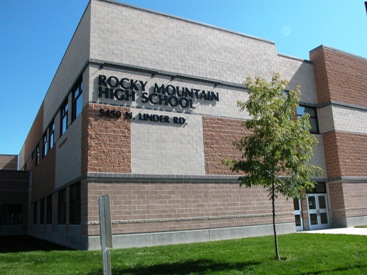 Well now, here is evidence of what I’ve been saying all along and that is that you cannot be religiously neutral. It just can’t happen. Religion is at our very core and if we will not honor the true and living God as God, then we will fill that vacuum with a false god. Exhibit A: Rocky Mountain High School in Colorado. Outrage is building over the fact that students were encouraged to recite the Pledge of Allegiance over the loudspeaker in Arabic replacing “one nation under God” with “one nation under Allah.”

The school’s principal, Tom Lopez, is standing by his decision to allow the pledge after receiving a flood of complaints from parents outraged over the incident. He claims to not be pushing and Islamic agenda.

Lopez told Fox News, “These students love this country. They were not being un-American in trying to do this. They believed they were accentuating the meaning of the words as spoken regularly in English.”

Danielle Clark, communications director of the Poudre School District, said “We understand not everybody would agree with the students’ choice. We’ve heard there are some who are upset.”

On the other hand, she said she received one email from a person who “thought it was a great thing.”

Catch that? In all of those that responded, Clark got one email that thought this was a “great thing!” Is this action backwards or what? Parents in Colorado, I’m warning you to get your children out of the public school system. This will continue to happen more and more.

As for the pledge, well look I’m not necessarily against it, but understand that it was composed by Francis Bellamy, a Socialist, who used Christian language to promote the idea of distribution of economic resources. That’s redistribution of wealth by government friends. That is the enemy of freedom in this country and that is what Barack Obama promotes.

As Christians, we are to have only One God and our King is King Jesus, not Allah.

“(Nuha) Kapatayes is one among a couple dozen members of the student-initiated Cultural Arms Club, which seeks to “destroy the barriers, embrace the cultures” that exist at not just Rocky Mountain High School, but also within the community. Members in November recited the Pledge in Spanish, sparking intense debate about whether saying the words of the Pledge in any language other than English was unpatriotic.

Despite “rude” comments from classmates who disagreed with the November recital and anticipated “resistance” this week, Cultural Arms Club members decided to go forward with translating the Pledge into Arabic. They have plans for translating it into American Sign Language, Korean and possibly Chinese.

“No matter what language it’s said in, pledging your allegiance to the United States is the same in every language,” said sophomore CAC member Skyler Bowden.”

Technically Skyler is correct. The language doesn’t matter. The substance does. Allah has not been a part of the founding of the United States, except to be a thorn in our side from the very beginning, which we attempted to deal with during the Barbary Wars.

“I’ve been shocked with prejudicial statements that have been made,” said Lopez.

Principal Lopez referred to the parents’ outrage as having “suspicion and fear expressed” in their minds, along with “some hate.”

“When they pledge allegiance to United States, that’s exactly what they’re saying,” Lopez said. “They’re just using another language as their vehicle.”

He claims that when one cites the pledge in Arabic that Allah is the word used for God, but that is not true. It is a proper name for their false deity, much like the God of the Bible’s is Yahweh. In other words, this is not a generic rendering of the word “God.” It is specific. Principal Lopez is simply naïve.

I’ll just remind you that the Council on American-Islamic Relations (CAIR) are the ones demanding that Muslims get special treatment in public schools, even granting that their students be allowed to pray and be excused from class for it. They have also passed out literature to teachers on the Islamic ideology and bashed schools for promoting off campus Bible studies. Yes, my friends, Islamists have an agenda here, whether Lopez does or not.

The parents were right to be outraged and if they truly love their children, they should do everything they can to get them out of the indoctrination centers of public “education” and teach them at home.