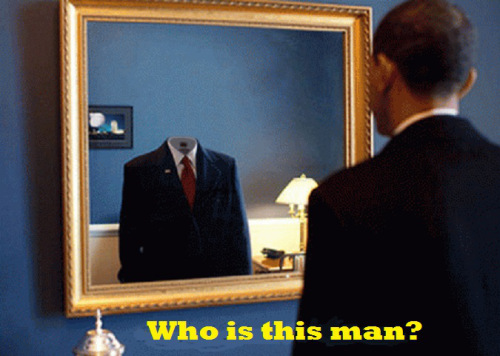 Author and 2008 Libertarian Party VP nominee Wayne Allyn Root was an undergraduate student at Columbia University the same time as President Lucifer. In fact, Root and Obama are supposed to be in the same graduating Class of 1983.

For five years now, since 2007, Root has maintained that when he was in Columbia U., he’d never met, seen, or heard of fellow student Obama, nor does he know any student or faculty who had.

Root writes: “I just returned from New York, where I attended my 30th Columbia University reunion. I celebrated with my esteemed classmates. Everyone except Barack Obama. As usual — he wasn’t there. Not even a video greeting. Not a personalized letter to his classmates. Nothing. But worse, no one at our 30th reunion ever met him. The President of the United States is the ghost of Columbia University. […] Don’t you think the media should be asking questions? Isn’t this a very strange story?

I am a graduate of Columbia University, Class of 1983. That’s the same class Barack Obama claims to have graduated from. We shared the same exact major — Political Science. We were both Pre Law. It was a small class — about 700 students. The Political Science department was even smaller and closer-knit (maybe 150 students). I thought I knew, or met at least once, (or certainly saw in classes) every fellow Poly Sci classmate in my four years at Columbia.

But not Obama. No one ever met him. Even worse, no one even remembers seeing that unique memorable face. Think about this for a minute.Our classmate is President of the United States. Shouldn’t someone remember him? Or at least claim to remember him?

One of the speakers at the 30th reunion should have reminisced about ‘my days with the future President.’ But no one did. You’d think Obama might have sent a video to tell us all how much he enjoyed his time at Columbia. You’d think he’d have sent at least a letter to be read aloud from one of his former college buddies. Right? But he didn’t. Because Obama has no former college buddies. No one that ever met Obama, let alone befriended him, was in attendance at our 30th class reunion.

Now you might argue this is all strange, but it’s possible. After all Columbia says he graduated. And I take my college’s word for it. Would one of the world’s greatest Ivy League institutions participate in a coverup, thereby risking their billion dollar reputation? And there is one single article written for the Columbia newspaper with Obama’s name on it. A single photo also exists of Obama in his Manhattan apartment with the man he claims was his college roommate — a Pakistani foreign student. And one single radical leftist Columbia professor who hates Israel also claims he remembers Obama.

That’s the sum total of Obama’s existence at Columbia University, Class of ’83.

So I asked every classmate I met at our 30th reunion, many of them Political Science majors, if they ever met, or saw, or heard of Obama. The answer was a resounding NO from every one of them. I asked if they found this strange, or worried how this was possible? They all answered YES. I asked if they thought it was possible to be a Political Science major and never meet a fellow major in our small classes? They all gave me a very strange look and answered NO. So I asked, ‘How could this be possible? Can you explain this?’ No one had an answer.

Keep in mind these people I spoke to are all — to a man and woman — dedicated liberal Democrats who voted for Obama. I’m guessing 90% are major Democrat contributors. My Columbia classmates are the crème of the crop of American society. Lawyers, doctors, billionaire hedge fund members, stars of the media. They adore Obama. But they all admit they never met him in their four years at Columbia. I am proud of my classmates for their honesty and integrity.

[…] So here’s my take on this great mystery. I’ve never said Obama was not registered at Columbia. I’m sure he was. I’ve never said he didn’t graduate. If Columbia says he did, then I’m sure he did. But I’ve always said there is something wrong with the story. It’s rancid. It’s unbelievable. It’s impossible. It’s the story of a Manchurian candidate.

The question isn’t was he ever registered, or did he graduate. […] But the serious question the media should be asking is…What did Obama do for two full years in-between registration and graduation? Did he ever attend a class? Did he ever have a single friend other than a Pakistani national? Why is the only professor to ever come forward and claim he remembers him a radical leftist who hates Israel? What exactly was he doing when no one met him, saw him, or heard of him? Why are his college records sealed? What has he got to hide?

But my educated guess is he can’t, or won’t ever release those records. Because what we’d find would be shocking.

[…] There is something wrong with Obama’s story — that much I know. He is either the ghost of Columbia, or the perfect Manchurian candidate. But something smells rotten at Columbia.”

In Part II of his essay for The Blaze, Root writes: “… until now, I was the only one publicly voicing my suspicions. That just changed in a big way. MeetProfessor Henry Graff, perhaps the most legendary and honored professor ever at Columbia University. He was THE American History and Diplomatic History professor at Columbia for 46 years. And he is more emphatic than yours truly that there are no Obama footprints at Columbia.

I was put on Professor Graff’s trail by another Columbia classmate, skeptical about Obama’s story. He told me that Professor Graff had been the speaker for the Class of ’53 last weekend at Columbia. My friend was watching Graff answer questions from the crowd when he was asked about Obama at Columbia. Graff said, ‘I have my doubts he ever went here.’

I did some digging and located Graff’s home phone number. I called him yesterday. Now retired, he was delighted to hear from me. He agreed to go on the record about Obama. Unlike Obama, Professor Graff clearly remembered me. He was thrilled to hear from his former student. I was in several of Graff’s classes and he remembered me like it was yesterday. He sounded great — like he hasn’t lost any of his trademark sharpness in 30 years since we last met.

I was honored to learn that this legendary historian has been following my political career for many years. But he had no such cheery things to say about the President. Graff said, ‘I taught at Columbia for 46 years. I taught every significant American politician that ever studied at Columbia. I know them all. I’m proud of them all. Between American History and Diplomatic History, one way or another, they all had to come through my classes. Not Obama. I never had a student with that name in any of my classes. I never met him, never saw him, never heard of him.’

Even more importantly, Professor Graff knew the other history and political science professors. ‘None of the other Columbia professors knew him either.’ said Graff.

Graff concluded our interview by saying, ‘I’m very upset by the whole story. I am angry when I hear Obama called ‘the first President of the United States from Columbia University.’ I don’t consider him a Columbia student. I have no idea what he did on the Columbia campus. No one knows him.’