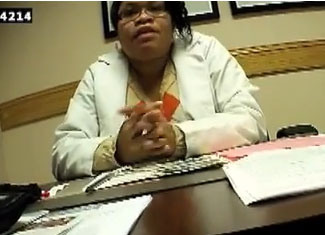 Years ago, after the Supreme Court’s Roe v Wade decision, wise people have warned that legalizing the murder of unborn human persons will transform America into a Culture of Death, wherein we increasingly lose our empathy and become callous and indifferent to degradation, suffering, and killing.

A new undercover video shows a New Mexico-based abortion practitioner telling a woman considering an abortion that killing a 27-week old baby is no different than getting a flu shot.

The pro-life group Live Action has released the latest in a series of videos exposing late-term abortion practitioners showing no compassion over killing babies late in pregnancy. In this new video, Dr. Carmen Landau, of Southwestern Women’s Options in Albuquerque, New Mexico, and a counselor employed at the same facility, are shown making shocking statements.

When asked by the Live Action investigator, “Is it a baby?,” the counselor answers:

Well what – how – what do you consider a baby?  It’s definitely a fetus. … Um, it depends what the term “baby” means to you, and how you perceive it.

When asked if the possibility of the pre-born baby feeling pain bothers her, the New Mexico counselor replies:

I feel that it’s, um, necessary for the procedure to happen and, ultimately, um, safest, and kind of the most, kinda, humane way to do it, you know?

Abortion doctor Carmen Landau tells the investigator that the injection that will kill her baby is “like any shot, you know, like a flu shot, or a vaccine, really.” Contrary to a large body of evidence, she alleges that babies in the womb do not feel pain or anguish from a poisonous injection, claiming that “it’s not like you and I [sic] where when we get a flu shot, we’re kind of, ‘Ugh!’ – not – that – that – that experience of anxiety and suffering is not – it [the baby]‘s not capable of.”

Lila Rose, President of Live Action, says she hopes to educate the nation on the true nature of abortion.

“These babies,” said Rose, “whom Carmen Landau calls ‘not a thinking being,’ are unique and precious human persons. They feel, they dream, they grow…and when an abortionist tries to kill them with a needle or with forceps, they react. They fight for their lives, just as any of us would. Our investigation has exposed the disturbing willingness of abortionists to engage in illegal and inhuman acts, including misleading pregnant women, pushing them into abortion, and even infanticide. This is horrible, but Americans should know just as well the horrifying practices that are still legal, that we allow to happen every day.”

The first half of Live Action’s latest video details abortionists’ estimation of the humanity of the unborn child. Abortionist Laura Mercer assures the investigator that her 24-week baby “doesn’t even look like a baby yet.” Live Action provides several images of premature babies born as early as 23 weeks.

The Live Action video chronicles the story of Toby, a baby born prematurely at 24 weeks – the gestational age of the organization’s pregnant investigators’ babies at the time of many of the undercover investigations. “Toby puts a name and a face to the atrocious murders occurring in these facilities,” Rose said. “Every day, abortionists are brutally killing children just like him. Whether they’re called ‘fetuses’ or ‘babies,’ this fact doesn’t change, and it’s time for Americans to come to terms with it.”

“What our video investigation is uncovering,” Rose said, “along with what we have learned from the trial of late-term abortionist Kermit Gosnell and from the whistle-blowers from Douglas Karpen’s facility, is that this is abuse. Abortion doctors, counselors, and other staff describe ‘stop[ping] the fetal heart,’ a needle being inserted through the baby’s head, an ‘intrauterine demise.’  They describe babies becoming ‘mushy,’ and how they ‘literally go in and grab and pull pieces out.’ They refer to these babies as human beings, and carry out these inhuman practices on them anyway.”

“Every human being is unique and precious from the moment of conception. But abortionists will not give even these babies – 24 weeks, 27 weeks, viable, capable of surviving outside the womb – the dignity of humanity. So we want to put the question in every American’s head: if not even these babies are worthy of humanity in the abortionist’s eyes, then what is human? What does ‘human’ even mean?”

The abortion of a 27-week-old unborn baby is a late term abortion — as are all abortions after the 20th week of gestation. In 2003, late-term abortions finally became unlawful in the United States when the Partial-Birth Abortion Ban Act(PBABA) was signed into law.

But Pres. Lucifer (and FLPOS Michelle, too) not only approves of partial-birth abortion, he three-times voted against the Born Alive Infants Protection Act of 2002 – a federal law, signed by President George W. Bush, which extends legal protection to an infant born alive after a failed attempt at induced abortion. (Read more: “Obama is evil.”)

This is the creature occupying the White House.