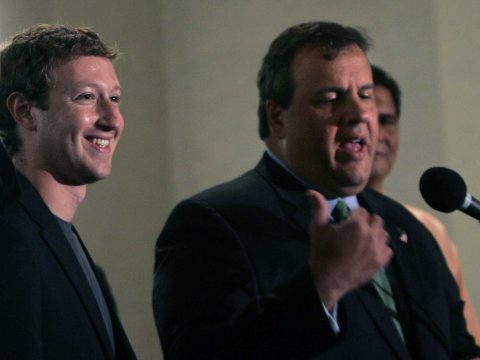 Unless the people of the once great Republican party open their eyes it will soon be over. I am not sure that it’s not too late already. What do you think of when you think of communist philosophy?

Well I think of a lot of things but mostly I think of their agenda and how they seek to accomplish it. The easiest way to take down an enemy is to infiltrate that enemy. This is how communism works. It is like a parasite. It attaches itself to its host unknowingly and inevitably brings it down. This is exactly what is happening in America with the Republican party. No longer can we trust any of the leadership because we simply do not know who is being bought and there are a lot of Republicans who are currently speaking for the far-left, whether they know it or not.

As always, I come armed with facts.

Have you ever heard of Americans for a Conservative Direction? It sounds like a group that we might like to support doesn’t it? This group is more well known by one of its chief financiers…Mr. Mark Zuckerberg. So is Zuckerberg a Conservative? Sure he is, IF you are willing to go by the new standards of conservatism. This is the problem. New era conservatives are not Reagan conservatives and they are over running the Republican party. Right Wing News reports:

Rubio, by far the most disappointing member of the so-called Gang of Eight, is also either the most naive man in the United States Senate or the most duplicitous. Recently, on the Spanish-language Univision TV network he bragged about his obvious sell-out to the illegal immigration lobby. Perhaps the senator thought that because the interview was in Spanish, it somehow wouldn’t make its way into the hands of a translator who actually cares about an issue as important as the invasion of our country by tens of millions of lawbreakers. In any case, Rubio brazenly admitted to an illegal alien-friendly audience that border security will, in fact, take a back seat to legalization and, ultimately, citizenship.

“Let’s be clear,” the senator stated. “Nobody is talking about preventing legalization. The legalization is going to happen. That means the following will happen: First comes legalization. Then come the measures to secure the border. And then comes the process of permanent residence.”

So who is feeding us these lies using Rubio and Ryan to scam conservatives? They are paid for by a group known as Americans for a Conservative Direction. Sounds good, right? Sounds like the kind of organization we should want to support. Don’t bet the farm on it.

It turns out that this group is being financed by none other than billionaire Mark Zuckerberg, the founder and CEO of Facebook. Mark Zuckerberg a conservative? David Horowitz – an ardent communist turned conservative and a man who knows one when he sees one – has called Zuckerberg an “uber-leftist” and Americans for a Conservative Direction an “Orwellian front group” filled with “Arlen Specter Republicans.”

What we must understand is that the real battle is not to defeat Republicans in elections. The “behind the scenes” battle is to turn the Republican party into an extension of the far-left. And unfortunately they seem to be accomplishing this goal. Zuckerberg is clearly promoting people like Lindsey Graham, Marco Rubio and Paul Ryan.

Then you have the case of Chris Christie and the fact that top George Soros hedge fund executives are funding his re-election campaign. The Washington Times reports:

at the University of California at Berkeley, a Newark Star-Ledger review of state and federal records found.

Five executives at Soros Fund Management — including the liberal billionaire’s protege and chief investment officer, Scott Bessent — have donated a combined $19,000 to the governor’s re-election campaign, The Star-Ledger reports.

and donors speculate on a potential run for the White House in 2016.

Few things will scare a true conservative more than the thought of Chris Christie being the 2016 Republican nominee for the White House but it could happen. Politico reports:

Fifty-two percent of Americans have a favorable opinion of Christie, according to a Gallup poll released Friday. The poll compares favorability ratings of Christie, Sen. Marco Rubio (R-Fla.), Rep. Paul Ryan (R-Wis.), Sen. Ted Cruz (R-Texas) and Sen. Rand Paul (R-Ky.), all of whom are seen as possible contenders for the 2016 presidential race.

Republicans and Democrats are, however, divided over which Republican officeholder they prefer. Christie remains the most popular among Democrats with 54 percent viewing him favorably. Just 17 percent of Democrats have a favorable opinion of Ryan. Among Republicans though, Ryan becomes the most popular with 69 percent favorability compared with Christie’s 53 percent.

It seems that the more liberal a conservative candidate is today, the more chance he or she has of progressing in the Republican party. What is wrong with this picture America?

Can the Republican party be saved? I doubt it. I suppose it depends on your view of what saving the party means. If it means a total sell out to make this into a party of “pseudo-socialism” versus the hard left’s full-blown socialism then the party can and probably will succeed.

But the question remains… Where does that leave conservative Americans who still believe in freedom and Constitutional values?

These are scary times my friend.