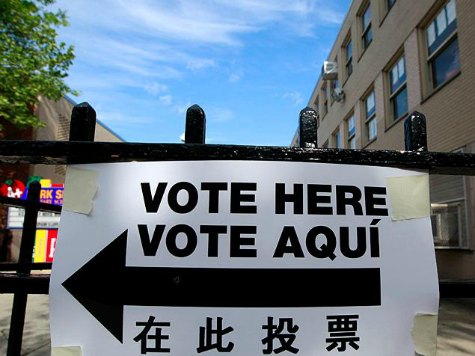 The United States Supreme Court ruled on Monday that states cannot require would-be voters to prove U.S. citizenship before using a federal registration system designed to make signing up easier. However, the Court gave them a plan that could gain them that power.

Fox News reports on the use of the federal registration system:

The justices voted 7-2 to throw out Arizona’s voter-approved requirement that prospective voters document their U.S. citizenship in order to use a registration form produced under the federal “Motor Voter” voter registration law.

Federal law “precludes Arizona from requiring a federal form applicant to submit information beyond that required by the form itself,” Justice Antonia Scalia wrote for the court’s majority.

The court was considering the legality of Arizona’s requirement that prospective voters document their U.S. citizenship in order to use a registration form produced under the federal “motor voter” registration law. The 9th U.S. Circuit Court of Appeals said that the National Voter Registration Act of 1993, which doesn’t require such documentation, trumps Arizona’s Proposition 200 passed in 2004.

Arizona appealed that decision to the Supreme Court.

Lyle Denniston at SCOTUS blog says there is a dual role of Congress and the states and that the case of Arizona v. Inter Tribal Council of Arizona had the potential for sorting those roles out. He wrote that “The end result will give both sides in that controversy encouragement, but perhaps rather confusing legal guidance.”

Denniston went on to expand on the ruling:

The argument before the Court was that the federal law must control, because Congress had specified that, in filling out a federal form, all would-be voters had to do was to swear they are U.S. citizens, while Arizona went further and required an actual piece of official paper to prove citizenship.   The challengers argued that the two approaches cannot co-exist, so the state proof requirement had to yield.

On the one hand, the Supreme Court agreed that, for now, Arizona’s proof requirement must yield to the federal form’s approach — that is, it is enough to register, using that form, if the would-be voter swears that he satisfies the citizenship requirement.

On the other hand, however, the Court also ruled that Arizona can seek permission from federal officials to impose its proof-of-citizenship requirement.  If it fails with that request, it can go to court and argue that it has a constitutional right to make proof of citizenship a binding requirement for all voters.

It was the kind of mixed decision that can sometimes baffle lay readers and, in this instance, maybe even lawyers and judges, too, because the two parts of the ruling did not seem to be reconciled easily.

Nina Perales, vice president of litigation for the Mexican American Legal Defense and Educational Fund and lead counsel for the voters who challenged Proposition 200, said “”Today’s decision sends a strong message that states cannot block their citizens from registering to vote by superimposing burdensome paperwork requirements on top of federal law.”

An obvious problem for Perales is that one is not a citizen by default and so her words are quite misleading.

“The Supreme Court has affirmed that all U.S. citizens have the right to register to vote using the national postcard, regardless of the state in which they live,” she said.

Both Justices Clarence Thomas and Samuel Alito dissented from the ruling of the Court. Thomas wrote in his dissent that the Constitution “authorizes states to determine the qualifications of voters in federal elections, which necessarily includes the related power to determine whether those qualifications are satisfied.”

Barbara Arnwine, president and executive director of the Lawyers’ Committee for Civil Rights Under Law, said “”The court has reaffirmed the essential American right to register to vote for federal election without the burdens of state voter suppression measures.”

Once again, Arnwine completely misrepresents voter registration and the right to vote. It is based on being a citizen, not being a law breaking illegal immigrant.

Judge Andrew Napolitano weighed in on the Supreme Court’s decision, saying that Thomas and Alito had the better arguments. “They say… ‘the Constitution says we have on national election, we have fifty separate state elections and the states decide what the standards are for voting.’ So the federal act says ‘are you a citizen?’ and you check ‘yes’ or ‘no.’ The state act said ‘are you a citizen?’ Check ‘yes’ or ‘no.’ Prove it.”

The host interviewing Napolitano understood correctly that this opens up rampant voter fraud in Arizona. Napolitano said that Arizona’s system was “failsafe,” but now gone thanks to the Supreme Court’s decision.

Perhaps the best thing for Arizona is to simply ignore the ruling, impose the standard of proof of citizenship and keep tell the Feds to “Come enforce SCOTUS’ decision.”