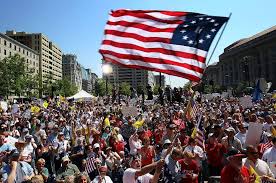 Ah yes, the liberal media. Remember all the shootings and the Boston bombings and how the liberal media just ached for the culprits to be “right wing extremists” or “Tea Party” people? Turns out the suspects were liberals and Muslims. Well now CBS News comes out and is equating the Islamists who were in the running for the Iranian presidency to the Tea Party. No, I’m not kidding. Watch!

Notice how the London correspondent Elizabeth Palmer tried to point out that “it was as if” all of the “conservative” candidates in Iran “came from the Tea Party.”

Former Governor of Alaska Sarah Palin chimed in on Fox and Friends about CBS equating the Tea Party with the new Iranian President declaring:

“Elizabeth, you just put the BS in CBS!”

“It’s things like that that people hear and see and realize how out of touch the mainstream media is,” she added.

Clearly there is bias in reporting. There always has been, but still some like CBS and other outlets want us to believe that they are unbiased.

CBS News anchor Scott Pelley weighed in on how he thinks CBS is different from those cable news networks like Fox News or MSNBC and that he believes they are biased, while the big three are not. Pelley attempted to paint a picture that CBS has no bias. In an interview with Deadline Hollywood, Pelley was asked, “So for you, other outlets especially the cable news networks do center on just one segment of the political spectrum in their reporting?”

“Certainly,” he affirmed. “It’s no surprise. Fox is associated with the right and MSNBC is associated with the left and they’ve done that because it is a business model. It’s a strategy. They’ve decided to bite off one small part of the viewership and be happy with that 200,000 viewers, 300,000 viewers that they have. But when you are talking to 7 million viewers across the country, man you have got to represent everybody’s views and have got to give them the impression that you are being as honest as you know how to be.”

Deadline caught his ignorance of his own industry and corrected him. “While the news flow on cable may be in the hundreds of thousands, a lot of people are watching Bill O’Reilly, a couple of million a night. Same thing with Hannity.”

“We measure our audience in millions,” Pelley said. “They’re not big numbers. People talk about cable a lot and cable has a very high profile. Not a lot of people watch cable news, they just don’t. If you look at the Nielsen numbers, the cable channels have a few hundred thousand viewers at any given moment. The CBS Evening News again has 7 million viewers, ABC has 8 million viewers. Brian [NBC’s Williams] has almost 9 million. Altogether we have about 25 million viewers on any given night. That’s a very different order of magnitude.”

First one should take in whether or not many of the viewers of CBS, ABC, or NBC even have cable or want it. Frankly, I have cable and don’t watch any of them. However, notice Pelley’s equivocation. First it was a mere 200-300 thousand. Deadline attempts to correct him citing O’Reilly with a couple million.

I don’t really care for O’Reilly, but let’s be honest, he had about 3 million viewers last Monday and The Five had 2.2 million, as did Special Report.

TV Newser reported on viewership of the evening news on the three major networks that CBS averaged 5.7 million, ABC 7 million, and NBC 7.5 million. That’s right at 20 million combined. It’s been years since these outlets have seen 25 million viewers combined.

There is no network that is unbiased. It just is not a reality. Reporters, anchors and executives will always report and advance reporting from their worldview. In case you didn’t know, I do that when I write and I’m not going to be ashamed about it.

By the way, that show that Palin appeared on, Fox and Friends, gets nearly 2 million viewers in the morning!