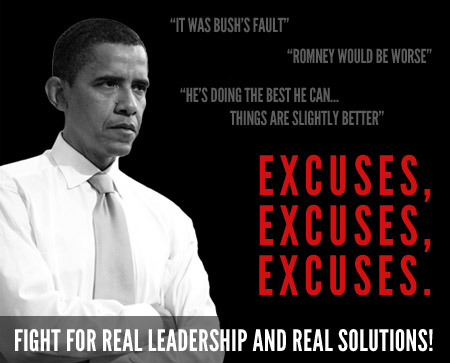 And the results aren’t even close.  I plan on comparing the Obama excuses to the actions of the greatest president of my lifetime, Ronaldo Maximus.  It would be extremely unfair to compare many “good” presidents to President Reagan.  But for Obama it is total humiliation.

The first excuse Obama used was George Bush.  No matter why his inept policies failed, he blamed it on George Bush.  By comparison, Reagan followed the worst president (pre Obama) in the history of our country.  Yet, I don’t recall President Reagan ever blaming Carter for the fact that he couldn’t do his job.  Perhaps it was because he was too busy doing his job.  Of course President Reagan had a big advantage.  He didn’t have golf and vacations to distract him.  Or George W Bush.

Then we were all subjected to the hue and cry over inheriting a bad economy.  But guess what?  The economy Reagan inherited was worse.  When Obama became president, the unemployment rate was 7.8%.  Reagan inherited a 7.5% rate but that was in the middle of a double dip recession.  The recession Obama inherited ended in the second quarter of his first year and before his policies began to be enacted, including the 840 billion dollar stimulus package.

The next excuse Obama used was the obstructionist republicans, who refused to rubber stamp his massive deficit spending.  But let’s look closer.  When Obama took office, democrats controlled the House 256-178.  Democrats controlled the Senate 59-41 (2 independents caucused with dems)  And at the start, he had a filibuster proof majority of 60-40.  Then Scott Brown won the Teddy Kennedy seat.  But when Ronald Reagan took office, democrats held the House 244-191 and the Senate by 54-46.

In fact, many of Obama’s losses came at the hands of the democrats, such as a tax on cap and trade, raising income taxes, and his 447 billion dollar jobs bill, which he lied about and said republicans blocked him.  The truth is democrats opposed the bill too and it only got 50 votes in trying to reach cloture.

Moreover, Obama pushed through such unpopular bills as the 410 billion dollar Omnibus Spending Bill of 2009, the 840 billion dollar stimulus, the 23 billion dollar teacher union bailout, the ill-named Finance Reform Laew, and another 8 billion for Cash for Clunkers (Sounds like a fundraising letter for the DNC doesn’t it?).  And let us not forget the granddaddy of them all , Obamacare.  While Obama sees the perception that he hasn’t succeeded to the bills he didn’t pass, the truth is it’s because of the bills he did pass.

True, Obama did lose his house majority after just two years, but then again that was due to his victories and not to his defeats. We are now in the fifth year of Obama and the economy is worse now than when he took over.  And it’s not Bush’s fault.  It’s not the economy he inherited.  And it’s not even the evil republican obstructionist’s fault.  So why has he failed?  We’ve looked at what each one inherited from the previous administration.  Now let’s look at how each worked to solve the problems.

At the beginning of his presidency, President Reagan had one goal in mind.  Grow the economy.  A growing economy creates jobs and wealth.  Wealth begets more wealth and more jobs.  The approach was so simple and yet effective.  He cut needless regulations, cut taxes, closed loopholes, aided in the drilling of more oil, and gave incentives for people with big ideas.

When Ronald Reagan took office, crude prices were 38 dollars a barrel.  When he left office, they were 14 dollars a barrel. He was able to roll back the failed oil policies democrats voted for in 1978.  The result of Reagan’s plan was that the US economy entered into 92 months of growth, besting the previous record of 48 months, or almost double.

So, what did Obama do once he got into office?  Just the opposite of Reagan.  He raised taxes and increased  regulations to the tune of  70 billion a year in just his first 4 years.  The Heritage Foundation has estimated the cost of his new EPA regulations on car mileage to be 8.5 billion a year and will raise car prices by $2000 to $2800 dollars.  And the current “affordable” $15,000 cars will be regulated out of business.  Cap and Trade, Obama plans to execute through the EPA will add tens of billions in costs to businesses that they have to recoup through higher prices.

The bottom line is that Obama’s only excuse for failure is his own policies.  The only advantage Reagan had over Obama is there weren’t nearly as many of those job killing ATMs in Reagan’s day.  Face it, Obama is a poor excuse for a president and nonexistent as a leader.