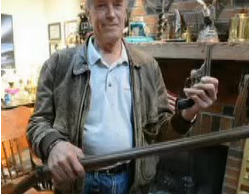 Arthur Lovi, 72, from Arlington Heights, Illinois suffered from high blood pressure, which his doctor said was the result of stress. After seeing a therapist, which his doctor had recommended, police show up at his house and confiscated several antique guns that he owned, violating his Second Amendment rights and because he claims they had no warrant, they violated his Fourth Amendment rights.

Lovi had been an Air Force crash rescue helicopter pilot in the 1960′s and had already seen a Veterans Administration (VA) psychiatrist once a month. However, he had been experiencing a lot of difficulty in recent years.

“I felt like the weight of the world was on my shoulders,” he said.

The Daily Herald reports on how his visit to see the therapist:

Lovi told her about the loss that had been all around him the past few years: his mother, a 3-year-old granddaughter who drowned, a son-in-law lost to a drug overdose, and worst of all, his wife of 33 years.

Cindy had died nine years ago, but to Lovi it was still raw. She was always tired and bruised easily. When he finally persuaded her to get checked out, she was told she had a cold, probably caught from one of her students at Forest View Alternative Center.

Unsatisfied, the next day Lovi made her see another doctor who gave her the correct, but heartbreaking, diagnosis: leukemia. Cindy died a few weeks later. She was 53.

Lovi told the therapist about Cindy’s death and his bitterness over the incorrect diagnosis.

Lovi admitted that if he ever saw the doctor that treated his wife, he would “beat him up,” but emphasized that he would not seek him out to assault him.

Following the session, which took place on August 30, 2012, Lovi’s therapist claims that she was concerned. She informed the Arlington Heights police that Lovi had made a threat against the first doctor who saw his wife.

She told them she didn’t think he would carry it out or that he was dangerous to himself or others, but she just wanted to do her job and report it.

In other words, by her own admission, she didn’t consider him a threat in any way, but she was “just doing her job” by reporting him. How’s that for a responsible doctor?

Following his return home that day, Lovi got a call from the Arlington Heights Police Department and they asked if he had weapons in his home. According to Lovi, who is retired and lives with his son, he told them that he did have three antique firearms, including a double barreled musket that was over 100 years old. Apparently Lovi decorates his home with old antiques, including old teakettles, ancient telephones and kerosene lamps. He claims he has never fired any of the weapons and doesn’t even know how to load the musket.

The police also asked if he had a FOID (Firearm Owners Identification) card, which he also affirmed.

While Lovi believed the police were satisfied with his answers, around 11 pm that evening four to five police officers showed up at his home and confiscated his firearms. While the police claim that he willingly handed them over, Lovi tells another story. He said they had no warrant, but threatened him that if they had to come back with a warrant that they would tear his house apart. They then proceeded to enter his house without consent and confiscate the firearms and his FOID card.

Lovi contacted the Arlington Heights Police Department and tried to retrieve his firearms two days, on September 1, 2012, after they were confiscated.

The Arlington Cardinal reports that a lawsuit has been filed and Lovi gives an account of what happened next:

The officers told Lovi that if he did not go into the ambulance willingly, they would handcuff him and physically put him in the ambulance. Lovi was transported to Northwest Community Hospital, where he was evaluated and it was determined that he did not need to be committed as there were no signs that he would be a harm to himself or others. Lovi was released from the hospital the same day.

For the next two months, Lovi repeatedly tried to get his firearms and his FOID card released from the Arlington Heights Police Department, but failed.

Lovi hired an attorney in October of 2012 and was able to retrieve his weapons. However, one of the antique firearms had been damaged, but Lovi was able to take the gun to a gun shop and have it repaired.

According to the lawsuit, Lovi suffered damages including loss of property and pecuniary damages including medical expenses, attorneys’ fees, and property damage. It also claims “Unreasonable Seizure of Property, Failure to Intervene with police officers’ indifference to Lovi’s right to be free from unreasonable seizures of property, Unreasonable Search of Home, Intentional Infliction of Emotional Distress, Willful and Wanton Intentional Infliction of Emotional Distress in the scope of employment, and that the Village of Arlington Heights is liable for any judgments for compensatory damages arising out of the police officers’ actions.”

UPDATE: I contacted Douglas Hajeck, Crime Prevention Officer with the Arlington Heights Police who said the police could not comment on the case since it was in the midst of court proceedings. However, reports can be obtained via the Freedom of Information Act.