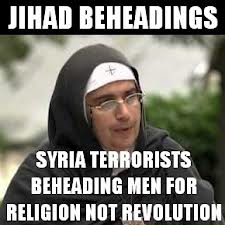 As Barack Obama prepares to arm Syrian jihadists with our tax dollars, I think we should consider just who he is arming. First, I don’t think we have any business in Syria in the first place, but consider who it is we’re arming: Al-Qaeda. This group recently beheaded a Christian husband and soon to be father. Then they demonstrated a complete disregard for his body by feeding it to dogs.

According to a 60-year-old Carmelite nun, Sister Agnes-Mariam de la Croix, taxi driver Andrei Arbashe, 38, was kidnapped after his brother was heard complaining that these rebels behaved like bandits. I’ll add that they are just following in the footsteps of their leader Mohammed, who was just that and more.

Arbashe was recently married and was soon to be a father. His headless corpse was found roadside, surrounded by hungry dogs.

The nun said, “His only crime was his brother criticized the rebels, accused them of acting like bandits, which is what they are.”

There have been a growing number of accounts of atrocities carried out by rogue elements of the Syrian Free Army, which opposes dictator Bashar al-Assad and is recognised by Britain and the West as the legitimate leadership.

Sister Agnes-Miriam, mother superior of the Monastery of St James the Mutilated, has condemned Britain and the west for supporting the rebels despite growing evidence of human rights abuses. Murder, kidnapping, rape and robbery are becoming commonplace, she says.

‘The free and democratic world is supporting extremists,’ Sister Agnes-Miriam said from her sanctuary in Lebanon. ‘They want to impose Sharia Law and create an Islamic state in Syria.’

The 60-year-old says that the West has turned a blind eye to the growing evidence that the Free Syrian Army is made up of a “fifth column” hell bent on ousting Asad.

“The uprising has been hijacked by Islamist mercenaries who are more interested in fighting a holy war than in changing the government,” she said.

“It has turned into a sectarian conflict,” she continued. “One in which Christians are paying a high price.”

“People are afraid,” she added. “Everywhere the deaths squads stop civilians, abduct them and ask for ransom, sometimes they kill them.”

Some of those fighting in Syria are the Jabat Al-Nusra, whose ideology is similar to Al-Qaeda. Of course it is, because it is Islam.

Rebels attacked the town of Ras Al-Ayn, on the Turkish border last month and went into the Christian quarters ordering them to leave their homes. “More than 200 families were driven out in the night,” said Sister Agnes-Miriam.

And yet in this country we have so called “Christians” pandering to Muslims and Islam, while our brothers and sisters across the ocean are being oppressed and murdered by people who believe in this barbarous ideology and our government is taking our tax dollars to help them do it. Where is the outrage?