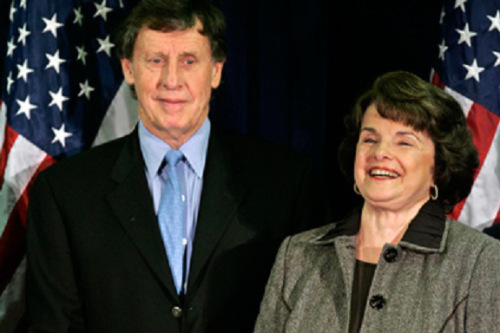 The email has been authenticated by the left-leaning Snopes to be TRUE.

The US has entered into a contract with a real estate firm to sell 56 buildings that currently house U.S. Post Offices. The government has decided it no longer needs these buildings, many of which are located on prime land in towns and cities across the country.

The sale of these properties will fetch billions of dollars and a handsome 6% commission to the company handling the sales. That company belongs to a man named Richard Blum. Who is Richard Blum you ask?

Why the husband of Senator Dianne Feinstein, that’s who. What a bunch of crooks we have running this country!

Senator Feinstein and her husband, Richard Blum, stand to make a fortune. His firm, C.R. I., is the sole real estate company offering these properties for sale. Of course, C.R.I. Will be making a 6% commission on the sale of each and every one of these postal properties.

All of these properties that are being sold are all fully paid for. They were purchased with U.S. Taxpayers dollars, and they are allowed free and clear by the U.S.P.S. The only cost to keep them is the cost to actually keep the doors open and the heat and lights on. The United States Postal Service doesn’t even have to pay property taxes on these subject properties. Would you sell your house just because you couldn’t afford to pay the electric bill?

How does a powerful U.S. Senator from San Francisco manage to get away with such a sweet deal?

A powerful United States Senator’s husband is standing by, all ready to make millions from a U.S. Taxpayer funded enterprise.

No one in the mainstream media is even raising an eyebrow over his 6% commission on the sale of hundreds of millions of dollar’s worth of quasi-public assets.

Along with the move to five-day mail delivery, selling post office buildings is part of the Postal Service plan to save $20 billion over the next three years. More than 600 buildings have been “earmarked for disposal” nationwide, at a savings of $2.1 billion, according to the Postal Service’s 2012 report to Congress. […]

In charge of selling the facilities for the Postal Service is CB Richard Ellis Group, one of the world’s largest real estate companies, chaired by San Francisco financier Dick Blum. CBRE, which has worked with the post office since 1997, was awarded the exclusive contract to market Postal Service facilities in 2011. Blum is married to Sen. Dianne Feinstein, D-Calif., a relationship some critics of the post office have duly noted.

“Historically, USPS has worked with multiple real estate service providers. The new contract enables USPS to consolidate these activities with one service provider,” CBRE said in a statement at the time.

On its website, CBRE shows 57 post offices nationwide listed for sale or in the process of being sold. […]

As for accusations of a conflict of interest and suspicions that Feinstein may have influenced the awarding of the contract to her husband’s firm, Feinstein’s office strongly denies the charges.

“Sen. Feinstein is not involved with and does not discuss any of her husband’s business decisions with him. Her husband’s holdings are his separate personal property. Sen. Feinstein’s assets are held in a blind trust. That arrangement has been in place since before she came to the Senate in 1992,” said Brian Weiss, Feinstein’s communications director. In 2012, Feinstein voted for an amendment to a postal reform bill that would have temporarily halted post office closings. The amendment was defeated in the House.

Both the Postal Service and CBRE insisted the 2011 contract was competitively bid. The Postal Service is an independent agency that reports to Congress, but there is no indication Congress plays any role in the awarding of contracts.

This is not the first time Blum’s business dealings have led to accusations of cronyism. From Wikipedia:

Blum’s wife, Senator Dianne Feinstein, has received scrutiny due to her husband’s government contracts and extensive business dealings with China and her past votes on trade issues with the country. Blum has denied any wrongdoing, however.[3] Critics have argued that business contracts with the US government awarded to a company (Perini) controlled by Blum may raise a potential conflict-of-interest issue with the voting and policy activities of his wife.[4] URS Corp, which Blum had a substantial stake in, bought EG&G, a leading provider of technical services and management to the U.S. military, from The Carlyle Group in 2002; EG&G subsequently won a $600m defense contract.[1]

In 2009 it was reported that Blum’s wife Sen. Dianne Feinstein introduced legislation to provide $25 billion in taxpayer money to the Federal Deposit Insurance Corp, a government agency that had recently awarded her husband’s real estate firm, CB Richard Ellis, what the Washington Timescalled “a lucrative contract to sell foreclosed properties at compensation rates higher than the industry norms.”[5]

Dianne Feinstein, ranked in August 2012 as the 14th richest U.S. politician, has a net worth estimated to be $70 million.

Feinstein and Blum are, respectively, 79 and 76 years old. Some super-rich people just never seem to have enough money. Though both are Jewish by ancestry, their “god” is Mammon.