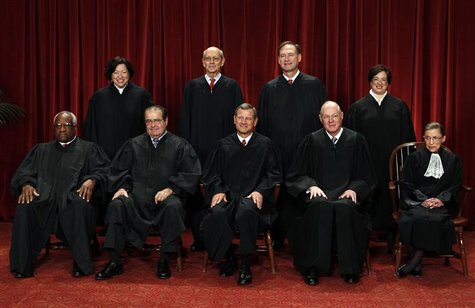 Nearly everywhere else around the world, voters are required to show their ID when registering to vote. This is essential to the integrity of elections because without voter ID, the door is open for massive voter fraud.

The National Voter Registration Act of 1993 requires States to “accept and use” a uniform federal form to register voters for federal elections.  The form, which was developed by the federal Election Assistance Commission (EAC), requires only that an applicant say, under penalty of perjury, that he is a citizen. In other words, no proof of U.S. citizenship is required to vote long as you say you’re one.

The Supreme Court threw out an Arizona law [Proposition 200] Monday and by a surprisingly lopsided vote, ruling state officials may not demand a proof of citizenship from residents who register to vote.

The 7-2 decision written by Justice Antonin Scalia [et tu, Scalia?] said this “proof of citizenship” requirement conflicts with the national Motor Voter Act. The measure said states must “accept and use” a simple registration form when filled out by residents who are registering to vote.

Scalia insists on closely following the words of the law, and in this instance, the words of the federal measure were clear in their meaning, he said. As written, the Motor Voter Act “forbids states to demand that an applicant submit additional information beyond that required by the federal form,” he said.

The Supreme Court ruling was a very lopsided 7-2 vote, with Justices Clarence Thomas and Samuel Alito being the only two dissenters.

“I do not agree, and I think that both the plain text and the history of the Voter Qualifications Clause, U. S. Const., Art. I, §2, cl. 1, and the Seventeenth Amendment authorize States to determine the qualifications of voters in federal elections, which necessarily includes the related power to determine whether those qualifications are satisfied. To avoid substantial constitutional problems created by interpreting §1973gg–4(a)(1) to permit Congress to effectively countermand this authority, I would construe the [Motor Voter or National Voter Registration] law as only requiring Arizona to accept and use the form as part of its voter registration process, leaving the State free to request whatever additional information it determines is necessary to ensure that voters meet the qualifications it has the constitutional authority to establish. Under this interpretation, Arizona did “accept and use” the federal form. Accordingly, there is no conflict between Ariz. Rev. Stat. Ann. §16–166(F) (West Cum. Supp. 2012) and §1973gg–4(a)(1) and, thus, no pre-emption. […]

Arizona has had a citizenship requirement for voting since it became a State in 1912. See Ariz. Const., Art. VII, §2. […]  In Arizona’s view, it “accepts and uses” the federal form in the same way that an airline “accepts and uses” electronic tickets but also requires an individual seeking to board a plane to demonstrate that he is the person named on the ticket. […]

The Voter Qualifications Clause, U. S. Const., Art. I, §2, cl. 1, provides that “the Electors in each State shall have the Qualifications requisite for Electors of the most numerous Branch of the State Legislature” in elections for the federal House of Representatives. The Seventeenth Amendment, which provides for direct election of Senators, contains an identical clause. That language is susceptible of only one interpretation: States have the authority “to control who may vote in congressional elections” so long as they do not “establish special  requirements that do not apply in elections for the state legislature.” U. S. Term Limits, Inc. v. Thornton, 514 U. S. 779, 864–865 (1995) (THOMAS, J., dissenting); see also The Federalist No. 57, p. 349 (C. Rossiter ed. 2003) (J.  Madison) (“The electors . . . are to be the same who exercise the right in every State of electing the corresponding branch of the legislature of the State”). Congress has no role in setting voter qualifications, or determining whether they are satisfied, aside from the powers conferred by the Fourteenth, Fifteenth, Nineteenth, Twenty-Fourth, and Twenty-Sixth Amendments, which are not at issue here. This power is instead expressly reposed in the States.

The history of the Voter Qualifications Clause’s enactment confirms this conclusion. The Framers did not intend to leave voter qualifications to Congress. Indeed, James Madison explicitly rejected that possibility:

“The definition of the right of suffrage is very justly regarded as a fundamental article of republican government. It was incumbent on the convention, therefore, to define and establish this right in the Constitution. To have left it open for the occasional regulation of the Congress would have been improper.” The Federalist No. 52, at 323 (emphasis added).

Congressional legislation of voter qualifications was not part of the Framers’ design. […]

Neither the text nor the original understanding of Article I, §4, supports that position.”

Mike Adams of Natural News correctly calls the Supreme Court decision as “You need ID to buy beer, but not to register to vote,” and that the ruling “all but openly endorses widespread voter registration fraud” — fraud that already was pandemic in the 2012 election. He concludes:

“With these two plans — widespread voter fraud and the instant citizenship of 11 million undocumented immigrants — democrats may very well be able to continue to hold power in Washington as they drive America into complete financial bankruptcy. But they don’t care about the long-term impact of their actions. The only thing that matters to them is to stay in power and keep milking the system for as long as possible before total economic collapse arrives.”

Just remember as things get worse and worse in America, it was the Supreme Court, with the exception of Justices Thomas and Alito, who had helped make it all possible.

I weep for my country.