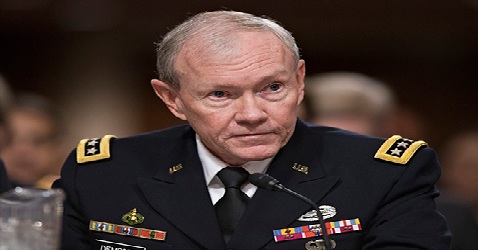 An attorney, whose firm represents two of the Benghazi whistleblowers, claims that Chairman of the Joint Chiefs of Staff General Martin Dempsey lied to the Senate when he said that there was never a “stand down” order given on September 11, 2012 during the Benghazi attack.

Joe DiGenova, the attorney representing Mark Thompson spoke about Dempsey’s testimony and told CNS News, “What was fascinating is that he explained his lie to them.”

“He actually said they were sent to Tripoli. They were needed in Benghazi,” said DiGenova, a former U.S. attorney, now with the Washington firm of DiGenova & Toensing. “They were told not to go to Benghazi, because their mission was Tripoli. I call that a stand down. He doesn’t. He can live with whatever he wants to think, but people died. In my opinion, what he did was lie.”

During testimony to the Senate Budget Committee last Wednesday, Dempsey said, “They weren’t told to stand down. A ‘stand down’ order means don’t do anything. They were told that the mission they were asked to perform was not in Benghazi, but was at Tripoli airport.”

This is contrary to what Gregory Hicks, former number two State Department diplomat in Libya, told the House Oversight and Government Reform Committee about the terrorist attack on the Benghazi compound that killed four Americans, including Ambassador Christopher Stevens.

Hicks told Congress that after the first attack, a security team left Tripoli for Benghazi with two military personnel and that four members of a Special Forces team in Tripoli wanted to go in a second wave but were told to stand down.

Hicks and Mark Thompson, acting deputy assistant Secretary of State for Counterterrorism, both testified to Congress in May about the State Department’s response to the Benghazi attack.

According to Col. Dave Lapan, the spokesman for Dempsey, the Joint Chief’s chairman stands by his testimony that there was not stand down order give. “As he testified before the Senate, the special operations team was directed to remain in Tripoli and to provide assistance to the wounded who were coming back from Benghazi, and they were not told to stand down.”

“The issue is trust and the continuing lying of this administration in every conceivable context in every branch of the government. It’s unbelievable,” DiGenova said. “It is remarkable. It is absolutely remarkable that they can lie with impunity and the media thinks nothing of it.”

This is in direct contradiction of the Benghazi whistleblower’s testimony. Former CIA director David Petraeus denied that a stand down order came from the CIA and said it could have only come from the Executive Office. A source indicated that it could only have come from Barack Obama.

Gregory Hicks was one of the whistleblowers that testified that there was a ‘stand down’ order given. When questioned by Rep. Jason Chaffetz (R-UT) during the House Oversight Committee hearings, Hicks said that the personnel given the stand down order were “furious.” He added, “I can only say — well, I will quote Lieutenant Colonel Gibson. He said, ‘This is the first time in my career that a diplomat has more balls than somebody in the military.’”

Chaffetz pressed Hicks to find out where the ‘stand down’ order came from. Hicks said “I believe it came from either AFRICOM or SOC [Special Operations Command] Africa.”

To confirm that Hicks was not misspeaking, Rep. Ronald Desantis (R-FL) asked, “Even though you believed help was needed, there was a SOF unit, special operations units ordered to stand down, correct?”

So someone is lying. Is it Hicks? Is it Dempsey? They both can’t be right and now it is up to Congress to start finding out which one of these men is lying. My bet is it’s Dempsey, seeing that the Obama administration has already demonstrated their ability and willingness to lie, not only on Benghazi, but on numerous policies. May justice be served.

Contact your Congressman and demand that someone be held accountable for perjury in this matter.