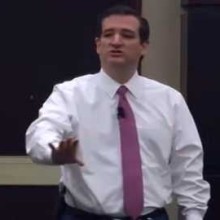 Senator Ted Cruz (R-TX) rallied Tea Party patriots around him to help abolish the IRS at the “Audit the IRS” rally on Wednesday in Washington, D.C. Cruz began by stating that he was a “little bit confused” by the fact that “The New York Times told me the Tea Party was dead. The IRS told me the Tea Party was dead.” However, Cruz said that “There was nothing more encouraging that millions of Americans all across this country standing up for liberty, standing up for the free market and standing up for the Constitution.” He then launched into a tirade against the Internal Revenue Service, calling for its abolishment.

“What’s happened with the IRS is an outrage,” Cruz said, referring to the recent scandal where they have been caught targeting political enemies of Barack Obama. “It is an abuse of power and it fits into the pattern of the Obama administration of abusing government power and then misleading the American people about it.”

He then admonished Barack Obama, saying he “needs to tell the truth.”

Cruz pointed out that when Nixon tried to use the IRS against his political enemies it was wrong and it’s still wrong when the Obama administration does it.

Cruz added that he hoped the content of our prayers was “Forgive them Father, for they know not what they do.”

When he told the crowd the key words the IRS was using to target Americans, including words like “patriot” and “liberty,” he also said they were “right to be afraid,” speaking of the patriots that had gathered there at the Washington rally.

So what is the solution to the IRS and its unethical targeting of American citizens? Cruz says, “We need to abolish the IRS.” He then suggested that we take the IRS agents currently working and place them on the southern border with Mexico.

“That’s mostly a joke,” Cruz said. “But I’ve got to admit, if you were coming over illegally and you crossed the river and you saw an army of IRS agents, you’d turn around and go home.”

Crus said that Americans should be able to fill out their taxes on a postcard and that the IRS was all about power. He even questioned why the head of the IRS met with the White House 157 times. He then compared that to the meeting between George W. Bush and the head of the IRS, which amounted to a whopping 1 time!

Cruz also asked the crowd if they were individually targeted to send an email to [email protected]. “We are going to get to the bottom of this administration’s abuse of power against the American citizens.

While I am thrilled that Cruz wants to abolish the IRS, it is what we replace the tax system with that concerns me. I’m open to ideas that completely remove the need for the IRS. Ron Paul has put forth a statement that I agree with:

“I lean toward a flat tax. But I want to make it real flat, like zero.”

What he means by that is to get away from an income tax completely. In an article by my friend Joel McDurmon, he puts forth a proper means of taxation that doesn’t require the IRS. He writes:

Well, there’s still one way you can destroy all government intervention of this kind. The only way to beat fat cat bureaucrats is to starve them of funding. In short: End the Fed and Abolish the IRS. But you have to get real and get serious about it.

Cruz currently has perhaps one of the most laudable reputations in Congress in terms of courage and consistency. His stand with Rand Paul and others on the Second Amendment had so-called RINOs McCain and Lindsey Graham literally yelling in his face in private meetings and lunches. But he stood anyway. This is why we have to be even tougher on Cruz than we would on others: because we now know that if he just knows what is right, he will probably stand for it against all opposition.

So here’s what’s right, Mr. Cruz. Here’s what “flat tax” really means: a single percentage for everyone across the board with no exceptions. But you have to acknowledge this still entails bureaucracy and invasion of privacy, not to mention the inherent theft of taxation.

So here’s what “Abolish the IRS” really means: repeal it and don’t replace it with anything. Instead—novel idea—cut spending.

McDurmon points to Ron Paul’s interview on Meet The Press back in 2007 where the late Tim Russert asked him if we abolished the IRS and the income tax “What would happen with all of those lost revenues. How would we fund our government?”

McDurmon concluded his article by writing, “Abolish the IRS, and don’t replace it with anything except less spending. And then, maybe then, I’ll send you a postcard.”