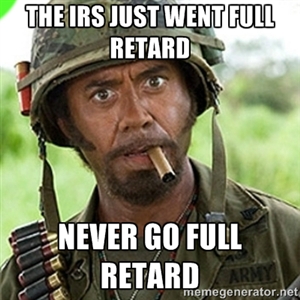 It gets worse. In 2011 the IRS sent 23,994 refund checks to a single Atlanta, GA address that totaled $46 Million. What could be worse than that? Those checks were all sent to “unauthorized” aliens for starters. Additionally this was not a single occurrence. It wasn’t even the only occurrence in Atlanta. The IRS sent between 2,386 and 11,284 refund checks to three other Atlanta addresses totaling another 6 million dollars. Again the recipients were “unauthorized” and again these checks were sent to single addresses.

Similar situations happened in Oxnard, California… Raleigh, North Carolina… Phoenix, Arizona… Palm Beach Gardens, Florida… San Jose, California… Arvin, California… and many other places around the country. Unfortunately I can verify that they did not send thousands of checks to my address. They did however send me a nice explanation of why they could not give me my first refund check in years. They like to tease me like that.

This “beyond bizarre” story of extreme government waste and IRS ineptitude was exposed Friday evening by CNS News:

The Internal Revenue Service sent 23,994 tax refunds worth a combined $46,378,040 to “unauthorized” alien workers who all used the same address in Atlanta, Ga., in 2011, according to the Treasury Inspector General for Tax Administration (TIGTA).

This is unbelievable. I honestly have no idea where to begin trying to process this story. For starters, how on earth can local postal workers not notice delivering thousands of refund checks to a single residence? You’d think that the 3 mail trucks sent to one address might leave a serious clue. 🙂

Beyond that, how on earth can a government agency have such lousy computer systems? At one time I was a self-employed direct mail specialist. I would religiously go through the simple process of cleaning databases to make sure that we weren’t sending multiple solicitations to the same addresses. How can the Internal Revenue Service not have similar safeguards in place? If a single address is getting more than 2 or 3 refund checks you would think that it would raise a red flag in any well-built system. The only explanation I can think of is that this Atlanta address must have 23,000 bedrooms which is why they immediately didn’t catch this. Come on… There is no excuse.

Keep in mind that the CNS article only lists data on the top 10 findings of the Inspector General. So how many addresses are getting 20 checks or 500 checks? And why in the hell isn’t an occasional postal worker catching on to that?

I can’t speak for the ineptitude of IRS workers or Postal workers at this point. But I think we need to make that civil service test a little harder. Maybe requiring a brain is a good thing. I realize that it may violate civil rights of stupid people but it’s just business. We can’t afford for stuff like this to be happening. How stupid are these people? Really? You can not sugar coat this. It’s unfathomable to think that this could happen without anyone noticing.

Regardless of the collective IQ levels of the workers involved, we need to understand how this could happen.

How are they getting by with it? We are assigning them tax identification numbers and opening ourselves up to fraudulent abuses of the system. CNS reports:

The IRS has long known it was giving these numbers to illegal aliens, and thus facilitating their ability to work illegally in the United States. For example, the Treasury Inspector General’s Semiannual Report to Congress published on Oct. 29, 1999—nearly fourteen years ago—specifically drew attention to this problem.

I have an outstanding idea. Why don’t we entrust the enforcement of Obamacare to these people? I wonder how many super smart people will figure out how to take the IRS for a ride on that. Seems like anyone with half a brain might be able to do it. You don’t even have to speak English to outsmart the IRS.

As we watch this Immigration Reform Bill shoved through the legislature we are about to make all of these criminals legal. Maybe they can start holding seminars around the country that teach the rest of us how to defraud the government of millions of dollars. I am most definitely interested at this point. Why reserve these benefits just for illegals? Citizens should hold the same rights as non-citizens.

I had to pull out a calculator.

I wish I wouldn’t have, because now I am even more depressed, but here is the math. $46,378,040 worth of refunds were sent to 23,994 recipients at that single Atlanta address. That means the average recipient received a refund of $1932.90. Who gets a refund like that?

As much as I want to send all 23,994 people back to wherever it is that they came from, I would first like to find out who their accountant is. I’d love to get a $1900+ refund. I almost received a small refund this year but at the last minute the IRS sent me a letter telling me that they had found some issues and I was REJECTED. They took it all and guaranteed I won’t be receiving a refund next year either. Honestly though, it has nothing to do with the fact that I started writing conservative blog posts this year. They would never do that. They only do that with non-profit applicants. 😉

The biggest crime in all of this is that these mistakes will really hurt everyone in the current economic climate. The Obama’s could have taken another vacation with that $46 million. Unfortunately they may have to skip the Australian Outback Adventure this year and it’s all because of the IRS. With any luck they squeezed enough blood out of the legal turnips and the trip won’t have to be cancelled. We can only hope.

As I write this I am currently feeling like this may be the most outlandish story of government ineptitude I have heard in my entire life. You can’t fire enough IRS workers to make up for this.

So I side with Ted Cruz in saying… LET’S ABOLISH THE WHOLE DAMN THING.