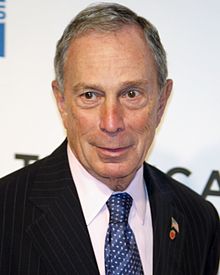 With billions of dollars in wealth, Michael Bloomberg still has to rely on the people of New York City to fund his anti-gun website. My parents always taught me that stealing is stealing. Whether it is a gumball or a brand new Mercedes does not matter. I would suggest that when there is smoke there is usually fire and this could be just the tip of the iceberg.

Ace of Spades uncovered an interesting fact on Friday. Bloomberg’s “Mayors Against Illegal Guns” website is actually registered to The City of New York. Specifically it is registered to “NYC DoITT” (the New York City Department of Information Technology & Telecommunications).

Really Bloomberg? The cost of registering a domain is less than $50 a year. Even with an estimated $27 Billion in wealth you can’t afford to spend $50 to register your web site? For the record here is the exact registration information for www.mayorsagainstillegalguns.org:

I would suggest massive amounts of phone calls to the number listed above but that’s just me. I think a few thousand questions about why a New York City municipal government agency is using taxpayer funds to register domain names for the Mayor’s private gun control efforts might be in order.

Did “Mayor’s Against Illegal Guns” reimburse the City of New York? It really does not matter. Do you think the City of New York would offer the same services to a pro-gun group? Not unless that group had some sort of political inside connection like Bloomberg’s…

Another Bloomberg group, Renew Our Economy, has their domain registered to Mayors Against Illegal Guns. This is all a bit of a mess, which shouldn’t surprise anyone at this point.

At best, this is really sloppy. At worst, this could be pretty serious. We’ll see what develops.

To verify this registration go to this site (opens in new window) and simply type in www.mayorsagainstillegalguns.org

You will receive the result I showed you above.

It’s doubtful that a $50 indiscretion will topple the Bloomberg empire, but again… when there is smoke there is normally fire. If he used public funds and/or resources for a domain registration, what else might be uncovered with a little more digging?