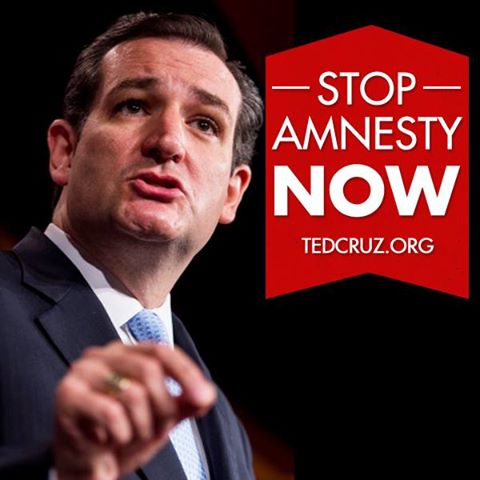 In an address on the Senate floor on Wednesday, Senator Ted Cruz (R-TX) blasted the Gang of Eight’s immigration reform bill demonstrating that it fails to secure the border. He then followed it up with a nation-wide petition to “Stop amnesty and demand border security.”

On Wednesday, Cruz said “Neither the Gang of Eight bill nor many of the alternative border security proposals that have been introduced do enough to meaningfully secure our borders. The last time this body passed major immigration reform was 1986.”

The Texas senator appealed to his own state where border security could mean the difference of life and death for Texas residents. “The insecurity of our borders is causing human tragedies in our country, many of which are occurring in in my home state of Texas.”

He continued to reference 1986 in hopes of teaching the Senate a lesson about immigration reform. “In 1986 the federal government made a promise to the American people,” he reminded his colleagues.

“The federal government said we will grant amnesty to some three million people here illegally [and] in exchange, we will secure the borders. We will stop illegal immigration, we will fix the problem. The American people accepted that offer. What happened in 1986 was the amnesty happened, three million people received it, and yet the border security never did.”

Cruz then laid out that the American people are not interested in politicians talking about fixing the problem nor are they interested in providing amnesty to illegals. “Talk is cheap,” he said. “We need to fix the problem. In closing I would ask you and I would ask the American people to focus on the cost, the human tragedy of our current system.”

“The American people are overwhelmingly unified that, number one, we need to secure the border,” he added. “And, number two, any bill that this body passes should have border security first and then legalization, not the other way around. You know, there’s an old saying that’s popular in Texas, ‘Fool me once, shame on you; fool me twice, shame on me.’

In an email to supporters, the Tea Party favorite senator encouraged Americans to sign his petition and to share it with friends.

He wrote, “”This is urgent. We must stop this Gang of 8 immigration bill, which would give amnesty to an estimated 11 million illegal immigrants with no guarantee of a secure border.”

“The Senate debate is in the final stages and we need to send Washington a strong signal of the overwhelming grassroots opposition to this amnesty bill from Americans across the country,” Cruz added.

He called on his supporters to “act now” and help “defeat amnesty and stand for legal immigration,” not legalizing illegals.