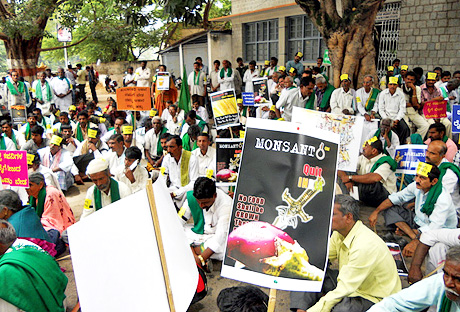 The US-based biotech giant Monsanto is locked in a lawsuit with five million Brazilian farmers, suing for as much as 7.7 billion US dollars (6.2 billion euros). Anthony Gucciardi points out that research indicates that Monsanto is responsible for farmer suicides at a rate of one every 30 minutes. However, just like those farming regions that became known as the “suicide belt,” this lawsuit against Monsanto is due to the company reportedly taxing the farmers to financial shambles with ridiculous royalty charges.

The farmers claim that Monsanto unfairly collects exorbitant profits every year worldwide on royalties from “renewal” seed harvests. “Renewal” crops are those that have been planted using seed from the previous year’s harvest. While the practice of renewal farming is an ancient one, Monsanto disagrees, demanding royalties from any crop generation produced from its genetically-engineered seed. Because the engineered seed is patented, Monsanto not only charges an initial royalty on the sale of the crop produced, but a continuing 2 per cent royalty on every subsequent crop, even if the farmer is using a later generation of seed.

“Monsanto gets paid when it sell the seeds. The law gives producers the right to multiply the seeds they buy and nowhere in the world is there a requirement to pay (again). Producers are in effect paying a private tax on production,” Jane Berwanger, lawyer for the farmers told the Associated Press reports.

In the latest installment of the legal battle erupting in South America, the Brazilian court has ruled in favor of the Brazilian farmers, saying Monsanto owes them at least US$2 billion paid since 2004. Monsanto, however, has appealed the decision and the case is ongoing.

In essence, Monsanto argues that once a farmer buys their seed, they have to pay the global bio-tech giant a yearly fee in perpetuity – with no way out.

While reusing seeds has been going on since Creation, Monsanto owns a patent for genetically modified seed that can cross pollenate and end up in many farmers’ fields through no fault of their own. Once they begin to sort those seeds out and replant them, they unknowingly are reusing Monsanto seeds. This results in Monsanto charging farmers not only for their original crops, but also for their later harvests as well. Granted, there are some farmers who knowingly reuse the genetically modified seeds and attempt to get out of paying the royalties on them.

In attempts to debunk genetically modified seed myths, Dan Charles points out that Monsanto has, in many cases, “overreached, engaged in raw intimidation, and made accusations that turned out not to be backed up by evidence.” While he claims that the company asserts that it will pay to remove any of its GMOs from fields where they don’t belong, he was unable to cite one source in which the company did so.

Many farmers in poorer nations have not been able to stand up against Monsanto and have taken to ending their own lives. As the Daily Mail reported back in 2008, there was what was known as the “GM Genocide,” which was responsible for the lives of over 17, 683 Indian farmers in 2009 alone. When these farmers found out their crops were failing and they experienced economic hardships, they began ending their own lives, many times they did so by drinking the very same insecticide that Monsanto provided them with.

Monsanto is not only a giant in the GMO business, but is also the world’s largest manufacturer of synthetic bovine growth hormone, which is injected into cows in order to stimulate greater milk production. This has also caused many to have health concerns over milk produced by cows that have been injected with these hormones. As recently as 2008, when dairy producers who did not use Monsanto’s products began to label their products as “Organic” and “Hormone Free,” the GMO giant slapped them with a lawsuit, claiming that those labels were negative advertising against hormone-produced milk. Ya think? Seems like Monsanto doesn’t like “truth in advertising.”

Just so we are clear, Phil Angell, Director of corporate communications for Monsanto, in a 1998 New York Times piece summed up how the company thinks about the safety of its customers. He said:

“Monsanto should not have to vouch for the safety of biotech food. Our interest is in selling as much of it as possible. Assuring its safety is FDA’s job.”

Monsanto has also been ousted in running illegal “slave-like” working rings and as a result of that information coming to light another group of farmers filed a lawsuit in April 2012 against the company for “knowingly poisoning” their workers and causing “devastating birth defects.”