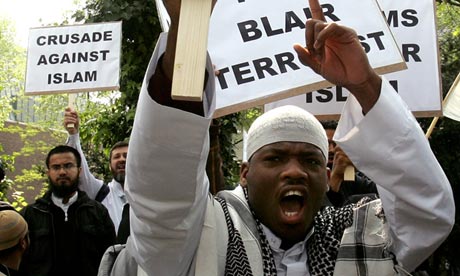 Following the brutal, cold blooded murder of Lee Rigby in London last month, another sickening display of what the “religion of peace,” Islam, is all about occurred last Saturday around 2pm BST as a disabled, wheelchair bound Christian man was allegedly murdered by an Islamic jihadist.

Daha Mohammed, 51, was charged in the murder of Colin Greenaway, 56. He allegedly slit Greenaway’s throat.

Greenaway was confined to a wheelchair after he had to have his toes amputated due to gangrene. A post-mortem examination determined that “incised wounds to the throat” were the cause of death.

He said: “Colin was a neighbour and a friend and I can’t believe what’s happened.

“I’ve known him for about 10 years, he’s helped me out and I’d help him out. Because he was wheelchair-bound I’d go and get something for him at the shop if he needed anything.”

The 46-year-old is now questioning how safe the area is following the events of the weekend.

He said: “I can’t believe something like this could happen in this area, everyone’s so nice. I’ve had to go to my doctor to get some pills because I’m struggling to sleep

“When one of his carers came to my door in tears I got dressed quickly and rushed downstairs. I saw him lying on the floor and he wasn’t breathing.

“It was clear nothing else could be done for him.”

Though this Muslim didn’t get the airtime that Mujaheed Adebolajo did, there is no question that the motive in the murder is the same. Remember, these are not radicals, they are Islamists. This is the face of Islam.

London, are you guys awake there? I know many are waking up as evidenced by the growth of the English Defense League following the murder of Lee Rigby.

Islam is a cancer that must be rooted out by the gospel of Jesus Christ or we will have to meet it with deadly force, as they will take nothing less than absolute submission as peace. Don’t be deceived.