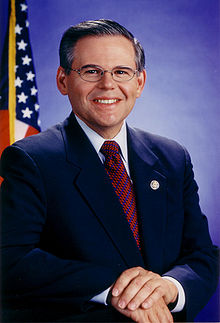 Senator Bob Menendez (D-NJ) might just have a problem. After being accused of soliciting, and then not paying the full amount to, some prostitutes in the Dominican Republic now there is a brand new scandal. The Daily Caller reported in November that Menendez solicited the services of two call girls and offered them $500 each. In the end both ladies claim that he only paid them $100 each. Come on Bob. It’s just money. The Fed will print more if you run out.

Note to Bob… just in case he is reading this. Pay the hookers the promised amount and maybe they won’t be ratting you out. It just makes sense.

Well it gets better. Or possibly worse depending on how you want to look at it… Now Menendez is accused of messing around with a married woman. The New York Post reported on Sunday:

Sen. Robert Menendez wooed a married newspaper publisher, taking the attractive brunette on a romantic getaway to the Caribbean, a tipster alleges.

The New Jersey Dem and Cecilia Reynolds jetted to Puerto Rico, where they stayed at the isolated beach retreat of the island’s then-governor, Anibal Acevedo Vila.

In a photo provided by the anonymous informant, Reynolds is sitting naked on a beach and suggestively smiling at the camera. In another set of pictures, they take turns posing against the same sunset backdrop.

The happy couple, dressed in shorts, also appeared to tour a national park and pose for a photo at a waterfall, Menendez wrapping his arm around Reynolds’ waist.

A document with copies of the photos along with details of the alleged tryst were provided to media organizations and the National Legal and Policy Center, a Virginia-based ethics watchdog group.

Reynolds, 50, the mother of two adult children, refused to talk to a reporter Friday as she left her Freehold, NJ, home and approached the Porsche Cayenne SUV in her driveway. She hurried back inside the house and would not come to the door.

“My husband and I were separated for a period of time in the past,” she said in a statement released Friday night. “Any and all allegations being peddled by a former disgruntled business partner are false and malicious.”

Her husband, Matt Reynolds, earlier told a reporter the couple was indeed married in 2007 when the affair allegedly happened. He said he would “neither confirm nor deny” her relationship with Menendez.

Well if Mr. Reynolds is not denying it, and saying that he can “neither confirm nor deny” then we all know what that means. If the affair didn’t happen then a loyal husband would be enraged at the very question. I would think that denial would be the normal reaction. But then again, what do I know? I can neither confirm nor deny what I know or do not know.

At first glance this story seems harmless and it would appear that Menendez was simply trying to qualify for an Ambassadorship to Belgium.

The truth is that no one will care. The voters certainly won’t care enough to get rid of Menendez. What do you expect them to do? Vote for a republican? Oh no, they would rather re-elect a potential sex addict. Politics before character. That’s how it works.

Regardless of how the voters may react he keeps us slightly entertained with his sexual exploits. The don’t call him “Sideshow Bob” Menendez for nothing. Well they don’t actually call him that. I can neither confirm not deny that I may have made that up. Either way,  I am hoping it sticks.