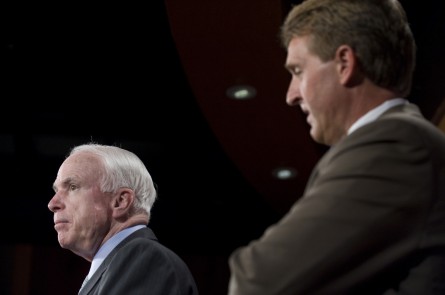 A new website is calling for a grassroots effort to recall Arizona Senators Jeff Flake and John McCain. The recall petitions are based firmly on the grounds of the Senators’ support of the   Amnesty Bill. The two “Gang of Eight” Senators have chosen to turn their backs on those who voted them into office and it is high time that Arizona gets their payback on the two RINO Senators.

The website, senatorflake.com, is very simple. They are not begging for donations and do not appear to be in the data harvesting business. This would appear to be an individual or group of citizens who have simply had enough and are looking to take action.

Every public officer in the state of Arizona, holding an elective office, either by election or appointment, is subject to recall from such office by the qualified electors of the electoral district from which candidates are elected to such office. Such electoral district may include the whole state. Such number of said electors as shall equal twenty-five per centum of the number of votes cast at the last preceding general election for all of the candidates for the office held by such officer, may by petition, which shall be known as a recall petition, demand his recall.

The site originally started with a singular goal to recall Jeff Flake but due to popular demand they decided to add John McCain to their hit list. The site features this YouTube video which clearly shows the complete turn around McCain has done on immigration reform. “Complete the danged fence.” Those are John McCain’s exact words.

The grounds for recall of Jeff Flake are listed as follows:

Recall Statement of Grounds:
Senator Jeff Flake of Arizona has proven in his recent voting record that he does not represent his Arizona constituents, and instead votes in direct opposition to Conservative and Republican interests.  Mr Flake voted to reward criminal foreign national illegal aliens with legal status before even attempting to secure our sovereign borders.  In the Judiciary Committee, Jeff voted against meaningful E-verify enforcement, and he even voted against a measure introduced by Senator Cruz that would block instant access to state and federal welfare benefits for illegal aliens.  Jeff Flake is proposing an immigration reform bill S.744 that abdicates Congressional authority to the Secretary of DHS, delays enforcement measures for years, and calls for plans rather than actual security on our sovereign borders and ports of entry.  His votes display an utter disdain for the rule of law, national security, and the welfare of taxpaying citizens.  We demand he be immediately recalled from office.

Again, this would very much appear to be a citizen organized grassroots effort with little or no money behind it. This makes it that much more important that people take action. Those who do not live in Arizona can help by simply spreading the word through social networks, forums and emails. If you have a blog you can use this article if you would like. I don’t mind at all.

For those of you who do live in Arizona this will take some leg work. There is a PDF file for both McCain and Flake that you can print out and pass around. You will need to talk to your friends and help get as many signatures as possible. They will begin to collect those signatures after July 4th, 2013.

I think it’s important to note that the people of Colorado have successfully gained enough signatures for recall elections of two state senators. This can be done but it will take effort. Again, those who live outside of Arizona can help by simply spreading the word.

The petition to recall Jeff Flake can be found here.

The petition to recall John McCain can be found here.

You know that you want to sign them both. 🙂

This is NOT solely Arizona’s fight. America needs to respond to help them. We may not all be able to sign the petitions but we can make sure more people know about them.

If Colorado can do it, Arizona can to. We must think positive and do it.

No excuses. No defeatist talk. It can be done.

For those who think that this problem rests solely on the shoulders of the people of Arizona you have simply not been paying attention.

Every blue-blooded-freedom-loving American wants these two Senators gone. Let’s put them both out to pasture.

No more Amnesty for RINOs!!!

The D.C. Clothesline is also sponsoring its own petition to try to raise awareness to Impeach Barack Obama on grounds of treason. We’d appreciate any support on that front as well. You will not be added to any mailing list. If you want to receive articles from The D.C. Clothesline you can subscribe to us in the upper right hand corner of this page. We are not in the data harvesting business. We just want Obama gone!