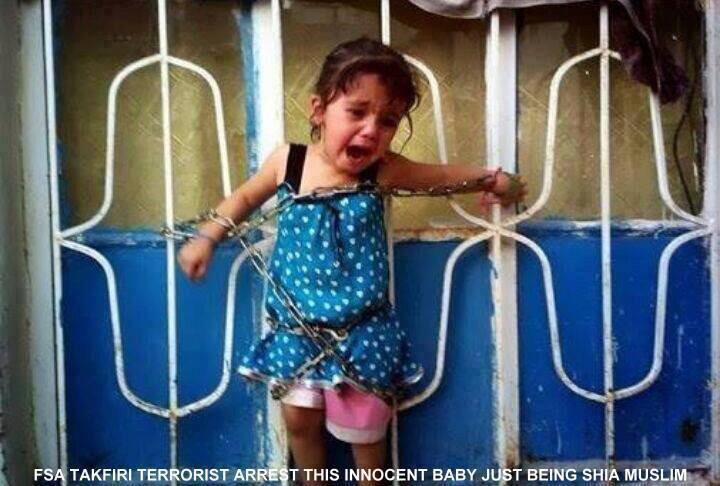 Looking away won’t make this problem disappear. Your government is in bed with terrorists. If you can look at this picture without wanting to vomit then you are obviously tougher than most. The Facebook Page Syrian Truth posted this picture on June 21st. Here is a translation of the verbiage with the photo courtesy of Raymond Ibrahim:

According to Syrian Truth’s Facebook page, the above photo is of a toddler living in the Deir ez-Zor Governate in eastern Syria, bordering Iraq. She was tied up by members of the U.S.-supported “Free Syrian Army” — which is dominated by foreign, Sunni jihadis — and made to watch as her mother and father were killed for being Shia. Here is how the Obama administration is using your tax dollars — mockingly in the name of “freedom.”

America what in the hell is going on here?

I have daughters and I can not look at this picture without getting seriously emotional. This little girl is precious. I don’t care who her parents chose to worship. She is a beautiful little girl and savages that would chain her up and make her watch her parents execution can be no friend of this country. It is absolutely beyond belief that we are supporting these monsters.

What is even more unbelievable is the lack of outrage I am seeing in my fellow Americans. I am not talking about the conservatives who I network with on a daily basis. I am talking about the clowns who only seem to care about the prime time lineup and how much beer they have in the fridge. An emergency to them is running out of chips.

This is a national emergency and I am sorry but you are either on the side of good or you are on the side of evil. As our friend Tim Brown recently reported, 4 Senators have introduced a bill to stop this madness. We have no business aiding these people in any way.

Recently The LA Times released an article that further reinforced what many of us have already suspected. The U.S. has been supporting Syrian Rebels since 2012. My personal suspicion is that it has been longer than that. Nevertheless, The LA Times reported:

CIA operatives and U.S. special operations troops have been secretly training Syrian rebels with anti-tank and antiaircraft weapons since late last year, months before President Obama approved plans to begin directly arming them, according to U.S. officials and rebel commanders.

The covert U.S. training at bases in Jordan and Turkey, along with Obama’s decision this month to supply arms and ammunition to the rebels, has raised hope among the beleaguered Syrian opposition that Washington ultimately will provide heavier weapons as well. So far, the rebels say they lack the weapons they need to regain the offensive in the country’s bitter civil war.

The tightly constrained U.S. effort reflects Obama’s continuing doubts about being drawn into a conflict that has already killed more than 100,000 people and his administration’s fear that Islamic militants now leading the war against President Bashar Assad could gain control of advanced U.S. weaponry.

The training has involved fighters from the Free Syrian Army, a loose confederation of rebel groups that the Obama administration has promised to back with expanded military assistance, said a U.S. official, who discussed the effort anonymously because he was not authorized to disclose details.

Yes that would be the same “Free Syrian Army” that is responsible for executing this child’s parents.

There was never any line to be crossed. That was simply an excuse to follow an agenda that has long been in place. Assad may be a very bad man but the Syrian Rebel forces are tied to Al Qaeda. What we might have here is two of our enemies fighting each other.

Regardless of Assad’s Regime we know for sure that Al Qaeda is our enemy.

So when our government aids a known enemy what do you call that?

That is treason. You can not debate it. It is the exact definition of treason. Anyone in the legislature who supports this is a traitor. Our president and many of his cabinet members are traitors. You can not describe it in any other way. We did not watch 10,000 Americans die at the hands of terrorists to suddenly become their ally.

Enough is enough America. Put the remote down and let’s do something about this.

Get loud and get in the face of your Representatives. We have to stop this.

Let them kill each other. I don’t know what else to do.

I surely know that I do not want my tax dollars supporting sickos who eat their enemy’s heart, feed victims to dogs and kill parents in front of precious children.

I understand that the other side might be just as bad.

We are obligated to support no one in Syria. We have enough problems at home that need to be addressed.

Either way, to support the enemy is treason. One way or another someone has to pay for that crime of treason.

This nonsense can not continue. This administration spits in the face of anyone who died in the battle against terrorism. Now they expect us to believe that Al Qaeda is the right side to be on? Anyone who remembers what happened nearly twelve years ago knows that this is not the case.

Yes, I understand that not all Syrian rebels are Al Qaeda. But any friend of Al Qaeda is no friend of ours.

We do not belong in Syria.

You should see the picture of the little girl blown up to its original size. You can see every ounce of pain in her little eyes. You can feel the terror. And we are giving those monsters the full support of our tax money.

Don’t you find it the least bit hypocritical that our Commander-in-Chief uses drones and allows the DHS to secure massive amounts of hollow point bullets while blaming Assad for war crimes?