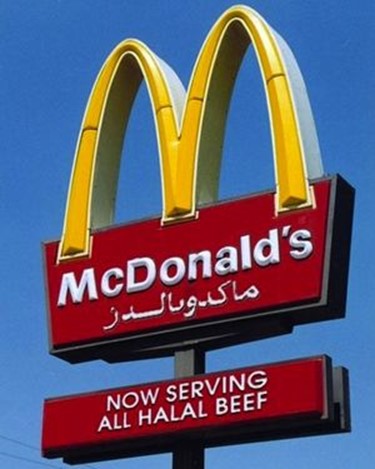 But after a disgusting lawsuit that accused the restaurant chain of selling non-halal items advertised as halal, McDonald’s has yanked its Halal Chicken McNuggets and Halal McChicken sandwiches off the menu.

Finally, a rational response to the endless intimidation and thuggery.

For those who don’t remember, McDonalds had to pay $700,000 in a lawsuit alleging a Detroit-area McDonalds restaurant “falsely advertised its food as being prepared according to Islamic dietary law.” It sounded like a set up to me — who inside McDonalds told the litigious Muslim that his $700,000 sandwich might not be halal?

There was “no evidence that MacDonalds was trying to deceive their customers.”

McDonald’s drops halal food from U.S. menu By Niraj Warikoo, Detroit Free Press via USA Today, June 24, 2013 (thanks to The Religion of Peace)

DETROIT — There have been only two McDonald’s restaurants in the U.S. that have offered halal food. Both were in east Dearborn, Mich., which has a sizable population of Arab-American Muslims.

But after a contentious lawsuit that accused the restaurant chain of selling non-halal items advertised as halal, McDonald’s has yanked its Halal Chicken McNuggets and Halal McChicken sandwiches off the menu. The move brings to an end a unique product that made the two McDonald’s restaurants popular with Muslims.

“Those items have been discontinued as a result of our continued efforts to focus on our national core menu,” a spokesman for McDonald’s said Friday.

At one of the two restaurants, the Ford Road location, a sign in Arabic and English on its drive-through menu informs customers that halal items are no longer available. The decision to discontinue the products after a 12-year run drew a mixed reaction in Dearborn: Some were disappointed, while others said it was a good move because McDonald’s had problems before with selling halal food.

The removal of the halal items, which was done last month, comes after a lawsuit filed in 2011 alleging that the fast-food restaurant was selling non-halal chicken it claimed was halal. Halal is the Muslim equivalent of kosher, requiring that meat be prepared according to Islamic guidelines, such as reciting a prayer while the animal is cut. In some cases, employees at the Ford Road location were mistakenly giving non-halal products to customers who asked for halal ones.

A $700,000 settlement was reached in April that allocated $275,000 to the Huda Clinic, a Muslim health center in Detroit; $150,000 to the Arab American National Museum in Dearborn, and $25,000 to Ahmed Ahmed, a Dearborn Heights man who filed the lawsuit against McDonald’s. The rest went to attorney fees.

McDonald’s denied any wrongdoing in the settlement agreement, which made no mention of stopping the sale of halal food. Some Muslims didn’t like the settlement, saying the money should have gone to individual customers, not organizations.

Kassem Dakhlallah, the attorney who filed the lawsuit, said Friday that the company’s decision to stop selling halal food is “disappointing.” He said that McDonald’s should have tried “to ensure that all products sold were halal as advertised.”

But, he added, if McDonald’s couldn’t guarantee that, “then ceasing to offer halal products was probably the best decision.”

Majed Moughni, who had opposed the settlement, said the decision by McDonald’s to end the sale of halal items “was the right thing to do.” After pressure from attorneys with McDonald’s, Moughni’s free-speech rights were curtailed after Wayne County Judge Kathleen Macdonald clamped down on his Facebook page, which was critical of the company’s handling of the case. The judge later lifted her injunction against Moughni after free-speech advocates defended him.

“If you can’t get it right 100% of the time, then you’re doing a disservice to the community,” Moughni said of the company’s handling of halal food. “Stop it if you can’t guarantee it.”

McDonald’s, which has more than 14,000 restaurants in the U.S., started selling halal products for the first time in the country at its location on Michigan Avenue near Greenfield in September 2000. It followed with the McDonald’s on Ford Road east of Schaefer. In 2000, about 65% of sales of Chicken McNuggets at the Michigan Avenue location were for the halal version.

Although McDonald’s has discontinued selling halal products in the U.S., it still sells halal food in Muslim-majority countries such as Saudi Arabia.