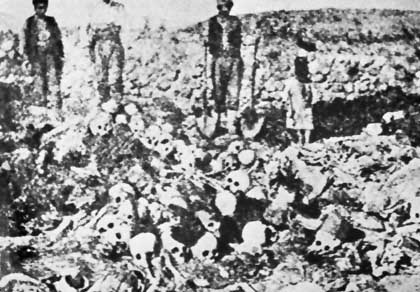 Close to two million Armenian Christians were slaughtered by the Muslims — that cannot be erased, that cannot be removed. The Armenian genocide was the Ottoman government’s systematic extermination of its Armenian minority (and other religious minorities) from their historic homeland in what is now Turkey. Other Christian groups, the Assyrians, the Greeks and other minorities, were also targeted for extermination. By Gd, Turkish Muslims shouldn’t be demanding that this history be scrubbed from the books; they should be apologizing and making amends, begging for forgiveness. Sick.

As for the Germans, I expect they, more than any other nation, will be sensitive to hiding or scrubbing a genocide from their  history books. Right?

Turks have gathered in German Dusseldorf demanding withdrawal of ‘In 1915 Turks committed genocide against Armenians’ formulation from history text-books.

According to Time Turk about 8 thousand signatures have been gathered in favor of it.

They have organized a rally in Dusseldorf trying to draw the attention on the gathered signatures.

One of the participants of the rally Ali Soilenmezoglu stated they demand the both parties to study the topic and give their response, otherwise they will continue the rallies.