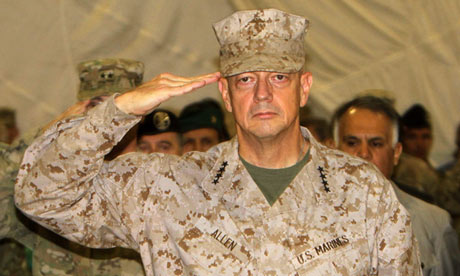 Back in November General David Petraeus resigned as head of the Central Intelligence Agency (CIA), claiming that he was in an adulterous affair, which was discovered by the Federal government snooping through his and his mistress’ emails. This came on the heels of Benghazi being blamed on a YouTube video. However, it was later to come out that there was another vixen by the name of Jill Kelley, who was allegedly swapping pictures between her and General John Allen, even though the Pentagon investigation denied any misconduct charges. Well, it seems that Obama has taken Allen out of the picture.

Barack Obama met with Allen on Tuesday to formally accept his request to retire. Allen said his resignation was to “address health issues within his family.”

“My primary concern is for the health of my wife, who has sacrificed so much for so long,” he said in a written statement. “For more than 35 years, my beloved Kathy has devotedly stood beside me and enabled me to serve my country. It is profoundly sobering to consider how much of that time I have spent away from her and our two precious daughters. It is now my turn to stand beside them, to be there for them when they need me most.”

He plans on returning to his home in Virginia.

“I told General Allen that he has my deep, personal appreciation for his extraordinary service over the last 19 months in Afghanistan, as well as his decades of service in the United States Marine Corps,” Obama said in a released statement.

This is the fourth senior military officer Obama has forced down from office.

Each of the officers were tied to the war in Afghanistan.

There was Gen. David McKiernan, the four-star who lead U.S. ground forces during the successful lightning Iraq invasion. He was asked to resign command of allied forces in Afghanistan just four months into Obama’s presidency in 2009. Never fully explained, but the implication was administration dissatisfaction with the war’s progress.

Gen. Stanley McChrystal, a special ops veteran who was McKiernan’s successor. He resigned when his staff was quoted making derogatory comments to an embedded journalist about the administration in general and VP Joe Biden in particular. If mocking Megamind Biden is worthy of resignation, then most of America needs to step down by lunch today.

Gen. David Petraeus, the architect of the surge and successful counter-insurgency strategy in Iraq, was demoted from Central Command to return to lead the Afghan war. After that successful tour Obama named him director of the Central Intelligence Agency, which required his military resignation after nearly four decades of service.

Tuesday Obama announced that unspecified health challenges have emerged in Allen’s family requiring his full attention and Allen has resigned the NATO nomination, which Obama feels compelled to accept. While, of course, deeply appreciating Allen’s long service to the country. One more gone. No mess. Never Obama’s fault.

What’s particularly striking is Obama’s meticulous demands over the conduct of top military commanders, those general officer boots on the ground with decades of experience at the front lines of leading our troops, guiding the nation’s national security protection and assisting the enemy to die for their cause.

With the start of his second term, Barack Obama has basically revamped his cabinet, posting liberals, leftists and Muslims in positions of power within the U.S. government.

Obama’s administration seems hell bent on removing any mention of Islam having anything to do with terrorism in his administration, as evidenced with the entire YouTube video fiasco following Benghazi, the Army’s manuals claiming Christianity as number one religious extremism ahead of Muslim Brotherhood, his administration’s equating the Founding Fathers with terrorists, the DHS’ preferential treatment of Islamic supremacists, and his Federal attorneys threatening American citizen’s free speech for speaking out against Islam.

Not only that, he has promoted the demoralization of the military by having the Pentagon implement policies that are not universally accepted by military volunteers, including the removal of “Don’t ask, Don’t tell,” which allowed the service of openly homosexual perverts in the military and assigning women to combat roles.

So who will be replacing General Allen, you ask? Time will tell. I’m guessing it will be someone that will be of a similar mind to Obama.