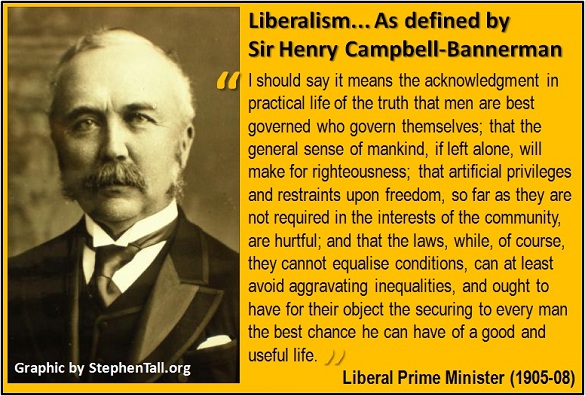 The term “liberal” was coined to mean those who loved and defended individual human rights, the rights of man, not the rights of groups or collectives.  Thus the definitive form of liberal government is the republic, wherein rights of individuals are codified in constitutions that protect each member of a society from the government that is supposed to serve them.  A pure democracy is NOT the tool of individual rights, but the mechanism by which said rights are abrogated, presumably by a majority who will something.  Pure democracies are collectivist forms of government, nothing more than mob rule, unless they are tempered by a republican  superstructure which underlies it and secures the rights of every individual citizen against abrogation of those rights by a majority.  In a true Republic, there can be majority rule, but it must be accompanied by scrupulous recognition of minority rights.  In a pure democracy, if a majority of the people decide to behead someone because he or she is black or red or of some religion other than that approved of by the majority, they can behead that person according to law.  In a true republic which guarantees the right of due process and the right to life unless a capital offense has been committed, the rights of individuals are guaranteed.  Thus, a majority CANNOT simply abrogate those individual rights. They cannot behead anyone simply by vote.

In a true republic, a document, such as a constitution, is put in place to guarantee that each citizen’s rights, derived from the fundamentals of life, liberty and property, are unalienable.  Democratic processes are used almost exclusively to select representatives who will uphold the constitution and the individual rights it guarantees.  A true republican form of government enables people to vote their will, but have it tempered by that central set of rules put into their governing constitution.  Thus, amendments to a constitution may be put to popular vote (referendum) but must be introduced, thereby approved of, by the representatives elected by the people.  But no state can offer unlimited referenda for all its laws and all of the amendments to them.  It would be unwieldy and dangerous to do so, for the closer to pure democracy a nation gets, the closer it also gets to prospects for chaos, hence for a dictatorship that can restore order.  And because the concepts upon which a true republic is built are easily perverted and misunderstood, a true republic can be vulnerable to ignorance of its citizens and to fraud by its leaders, even though they have been elected by a majority.  It may be well remembered that Hitler was elected Chancellor of Germany before declaring himself supreme leader, or Fuhrer.  When, after the first Continental Congress met, Benjamin Franklin was asked what form of government the people had been given, he replied, “A republic, if you can keep it.”  Politicians who preach endlessly to advocate what they call “democracy” are trying instead to insure their own power against even the democratic principles they preach.  They want power.  They want to hold it and wield it.  They do not care ultimately whether they uphold individual rights or not, so long as they can hold political power.  We have some safeguards against the encroachments of tyranny, but they must be brought out again for everyone to see and learn.

Benjamin Franklyn was a wise man.  It may be wondered what he would think if he were alive today.  For more than a century, we in the US have experienced a gradual dilution of our republican principles, consequently also of our individual freedom and rights, all in the name of “democracy.”  This dilution has been so gradual and subtle that it has not always been noticed.  Even the term “liberal” has been perverted to mean not the rights of each and every individual citizen, but the supposed rights of one group or another over the rights of individuals.  It has been said that human life cannot be weighed by the pound.  But Stalin said that while one death was a tragedy, a million deaths are a statistic, indicating that from some perspectives human life can indeed be measured collectively.  In fact, this is exactly what a pure democracy does.  It votes as a collective to treat “the people” (a collective) and not individual citizens.  This is what is being done to citizens in the US today.  When the government says this or that is best for the majority, especially when the this or that being spoken of is some political expedient, the rights of individual citizens are abrogated.

Nowadays, all politicians seem to be corrupt.  Lord Acton said, “Power tends to corrupt.  Absolute power corrupts absolutely.”  He was speaking the truth.  But he did not get to the heart of the matter, which is that the desire for power is the seed of corruption and almost predicts that anyone asking for power will eventually be corrupted by it.  In our day and age, politicians make promises that are false and misleading.  There are discussions at each election cycle during which the pundits describe how politicians are “positioning” themselves to win election, and will soon “reposition” themselves when in power.  It seems to these pundits to be perfectly acceptable for politicians to do this, even openly, just so that they can grab political power.  Thus they memorialize the process of lying, as though it were a norm.  Political power is power over people.  Thus, logically, the politician who lusts for the ultimately corrupting power is the very one who ought to be kept away from possessing it.  But this is a difficult principle to practice in a system which requires one to run for office.  The only answer, the only protection voters have, is always to be skeptical of any and every promise made by any and every politician, and to be ready to throw out of office any politician who slides on a promise made to his electorate.  Severe term limits would help this process, but there is much more required than simply voting out the bad.  The principles of the republican form of government, wherein each and every individual citizen has the maximum freedom to his own life, liberty, property and the pursuit of his own livelihood, must be restored to their original full glory and status and every citizen must master those principles so that no one can ever dare to steal them away.  To do this, the people must find a leader hard-nosed enough to stop the train of “democratic tyranny” and restore the republic to its rightful principles.