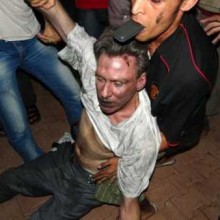 Ambassador Christopher Stevens’ journal was published for the first time on Wednesday. Stevens was one of four Americans killed with Islamic jihadists attacked the American compound in Benghazi, Libya that he was held up in on September 11, 2012.

In understanding the events leading up to the attack, Brandon Webb, editor-in-chief of SOFREP, the news site covering U.S. and Coalition special operations news, has decided to publish the journal.

“Some will be shocked that we’d post U.S. Ambassador Stevens’ journal. However, we’d like to point out that this is not a classified diary; it’s a professional journal kept by an employee of the U.S. government. Any personal thoughts not related to Stevens’ official duties have been redacted out of respect for the late ambassador, and his family,” Webb, a former Navy SEAL and author of the best-selling book “Benghazi: The Definitive Report,” told Newsmax Tuesday in an email.

Webb said, his website “made a [conscious] decision to post the diary because the professional journal has clear journalistic value” and contains important information, which he charged is related “to a clear and intentional cover up” by the Obama administration.

“Our bias in all of this is to shed light on the truth with regards to the Benghazi attack,” he added.

According to Webb, the diary reveals the ambassador’s private concerns about the worsening security situation in the region. For example, on Sept. 6, Stevens wrote about the transition of authority that had occurred in the aftermath of the Libyan Civil War.

“Back in Benghazi after 9 months,” he wrote. “It’s a grand feeling, given all the memories.”

Though Stevens wrote on September 10, 2012 that “It is so nice to be back in Benghazi,” the following day he wrote an eerie foreshadowing of the attack that would occur that evening: “Never ending security threats.”

Webb indicated that Stevens knew how dangerous Benghazi was, however he apparently couldn’t see the retaliation that was coming his way in response to Special Operations strikes.

Webb believes that the journal will also help highlight the failure of US foreign policy in the region.

“It’s time for new leadership at the Department of State, and in Washington. We need new leaders with integrity, ones who are not afraid to admit their mistakes and will hold themselves and their subordinates’ accountable,” he said.

I’d say he’s right, but we need a lot more cleaning of house than just the Secretary of State. We should also be looking at the CIA and the White House as well.

Today Jan Stevens, Christopher Stevens’ father, penned an op ed for CNN in which he discusses his son’s service.

“Chris was not willing to be the kind of diplomat who would strut around in fortified compounds. He amazed and impressed the Libyans by walking the streets with the lightest of escorts, sitting in sidewalk cafes, chatting with passers-by. There was a risk to being accessible. He knew it, and he accepted it,” Jan Stevens writes, without mentioning the diary. “What Chris never would have accepted was the idea that his death would be used for political purposes. There were security shortcomings, no doubt. Both internal and outside investigations have identified and publicly disclosed them. Steps are being taken to prevent their reoccurrence.”

“So rather than engage in endless recriminations, his family is working to continue building the bridges he so successfully began,” he adds.

One thing is for sure from a reading of the journal and that is that Stevens was aware of the threats and the Obama administration should have been aware of them too and acted accordingly, by providing heavy security. They didn’t. It’s called dereliction of duty.